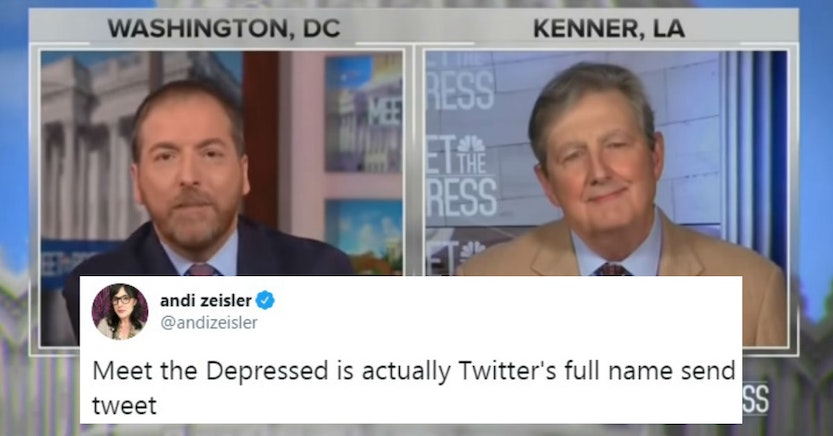 Donald Trump called the long-running public affairs program Meet the Press by the name “Meet the Depressed” this morning in what could have actually been funny if he weren’t supporting a man pushing a Putin-approved conspiracy theory. The tweet praised Senator John Kennedy’s performance on the show after he pushed the debunked conspiracy theory that Ukraine was the country meddled in the 2016 U.S. presidential election.

Thank you to Great Republican @SenJohnKennedy for the job he did in representing both the Republican Party and myself against Sleepy Eyes Chuck Todd on Meet the Depressed!

Kennedy has repeatedly pushed this theory, suggesting the same thing on Fox News last week before being fact-checked so hard that he actually admitted to being wrong.

“I was wrong,” he said on CNN. “The only evidence I have, and I think it’s overwhelming, is that it was Russia who tried to hack the DNC computer… I’ve seen no indication that Ukraine tried to do it.”

But on Sunday, Kennedy was back at it again with the same narrative he called “wrong” less than a week ago, claiming that White House Russia expert Fiona Hill’s testimony about the conspiracy theory an “opinion.” He was challenged on this by NBC Political Director Chuck Todd, who has every right to be tired at this point.

“You realize, the only other person selling this argument outside the United States is this man, Vladimir Putin?” Todd asked.

“Are you at all concerned that you’ve been duped?”

Kennedy wasn’t concerned, perhaps because he knew he would get the support of the president.

Meanwhile, because almost everyone on Twitter is already depressed, they’ve got jokes locked and loaded for the idea of “Meet the Depressed.”

"Meet the Depressed" best describes every White House staff meeting, where everyone in attendance feels like a cross between a hostage and a zombie. https://t.co/cbfKGcBi8y

Trump calling Meet the Press "Meet the Depressed" is objectively hilarious because we all are actually depressed.

I dgaf what Trump is saying (can't see it anyway), "Meet the Depressed" is the name of my AMA.

He worked all morning on Meet the Depressed guys. https://t.co/n54MGW8x21

Nothing sums up the Trump era better than "Meet the Depressed." Yes, we've all been depressed since 2016.

Look Meet the Depressed is my idea for an ABC sitcom about a family of WACKY MILLENNIALS that will appeal to Boomers & older Gen-Xers so Mr. President kindly back the eff off https://t.co/K4YMDg3ul6

Every person in media: "Hold my Lexapro."

Others are disappointed that the phrase wasn’t about mental health awareness.

I thought meet the depressed was trending as a public service announcement because America’s suicide rate has increased 33% only to find out it was just another edgy rich boomer trying to remain relevant 🙄 pic.twitter.com/crqQIUIec7

I saw “meet the depressed” trending and was thinking it was gonna be people removing stigma around depression...I was very disappointed to realize it was just trump trying to mean girl shit again pic.twitter.com/TE2K6t2L9s

.... oh, it’s our President valuably spending his time on twitter attacking his opponents and doing nothing to address mental health because in what world would that happen?

I figured "Meet the Depressed" trending would have something to do with mental health awareness.

Keep taking your meds, everyone.