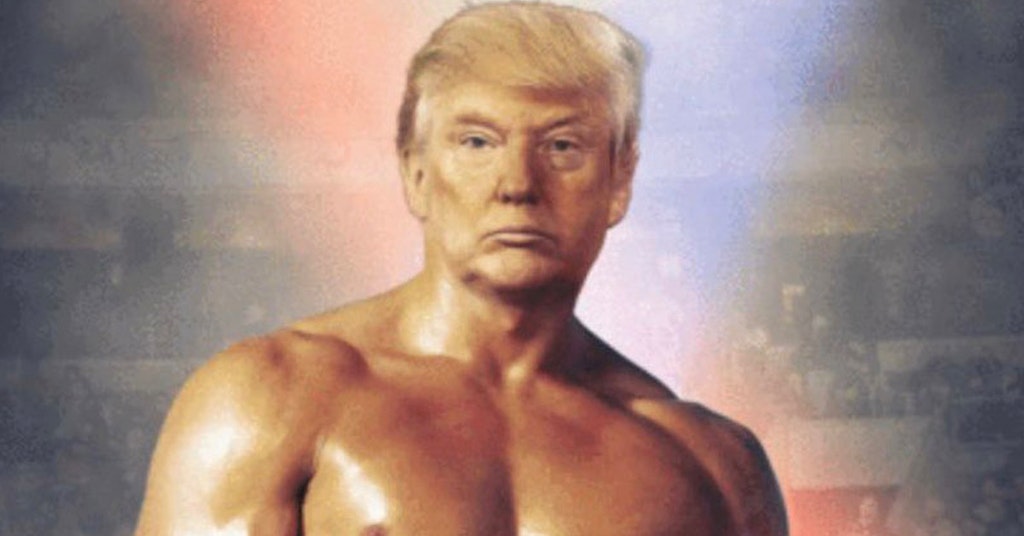 We know by now that Donald Trump’s grasp on reality is loose at best. The man barely knows what day it or who he is talking to. He only comes alive in front of a camera, and then he’s just animated by lies about Thanksgiving and whether or not he commits crimes with Rudy Giuliani. His delusions of grandeur keep him alive.

But it’s possible no one really understood the depth of Trump’s insanity until today when he tweeted—without any explanation—this picture:

The picture appears to be the president’s head superimposed over an image of Sylvester Stallone from Rocky III. No one is exactly sure why the president would share this cursed image, but the Washington Examiner reports Trump has been talking about his chest since he was rushed to the hospital for totally normal reasons early on a Saturday.

On Tuesday evening at a “Keep America Great” rally in Florida, he told the assembly that the doctors at Walter Reeded told him to “show us that gorgeous chest.”

"Show us that gorgeous chest. We want to see it. We've never seen a chest quite like it."@realDonaldTrump jokes that the doctors wanted to see his "gorgeous" chest when he went to the hospital and he wasn't wearing a tie. pic.twitter.com/Ux3KjOglKt

“We want to see it,” he said they demanded. “We’ve never seen a chest quite like it.”

Maybe Trump realizes we will all mock this picture and is enjoying the response, or maybe he really sees himself this way. It’s hard to tell, but also impossible not to comment on:

Really appreciate all the Trump apologists telling me that a man who is this willing to broadcast his insecurity is not an easy mark for other countries. https://t.co/lbj0Xx5oG8

Donald Trump is the epitome of toxic masculinity. All this posturing, all this bullying, all the authoritarianism and embracing of dictators and war criminals is an attempt to hide a really deep and really pathetic insecurity.

The man has lost his mind. (Did Putin paint it?)