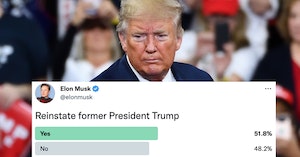 Donald Trump’s Twitter has been reinstated after Elon Musk conducted a Twitter poll asking users what they wanted to see happen.

It’s hard to forget why Trump was booted from the social media platform in the first place. After years of using his account to spread conspiracy theories and further divide the country, the part he played in the Capitol riot was the last straw, and the company permanently suspended his account out of belated concern that he would go on to incite further violence.

The possibility of Musk reinstating the twice-impeached former president’s account always seemed likely, even as he tried to soothe concerns of advertisers that Twitter wouldn’t become overrun by hate speech.

The time finally came this weekend, after the billionaire ran a poll asking users whether they thought Trump should be allowed back or not. Unsurprisingly, the question prompted fierce reactions from both sides, with critics pointing to all the damage he’s done and supporters insisting Trump has never done anything wrong in his life.

Ultimately, the “yes” votes won, 51.8% to 48.2%. Unlike the presidential election Trump falsely believes was “stolen” from him, the validity of the results of this particular poll are easily questionable, but it’s entirely possible Musk would have reinstated the account either way.

After using Truth Social to ask supporters to vote in favor of his account being reactivated, Trump said he didn’t “see any reason” to return to the platform, using the opportunity to instead continue promoting Truth, which he founded.

Whether he continues to stay away from Twitter during his upcoming campaign for reelection remains to be seen, but the move did give Musk more approval from the rightwing extremists he seems desperate to please.

Conversely, it was lambasted by many others who have no interest in a return to the constant chaos the United States was thrown into during the Trump era, and who are appalled at how quickly Musk has made a mess of a social media platform that has been such an important place for information and community over the last decade.

All we can really do is sit back and see what ridiculousness Musk barrels into headfirst next, as being subjected to the whims of an immature and bored billionaire is surely what the Founding Fathers had in mind when setting up the United States as a “free country.”