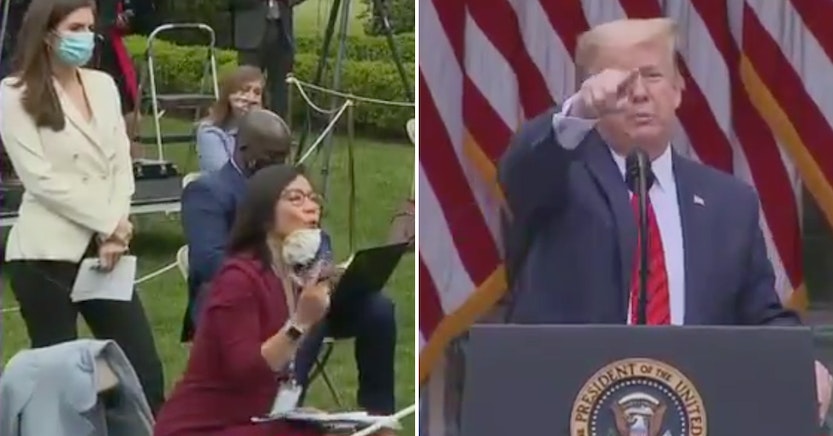 Donald Trump has a contentious relationship with reporters at the White House, to say the least. He often calls facts “fake news,” argues with anyone who disagrees with him, and restates his own nonsense over and over with no factual basis. If he didn’t love attention more than he hates people challenging him, he probably wouldn’t ever speak to the press at all. On Monday, it seems like the scales tipped when one reporter called him out on his blatant racism directed her way.

Weijia Jiang is a White House correspondent for CBS News, and CNN reports that she was asking Trump why he has treating coronavirus testing as a “global competition,” especially given over 80,000 Americans have died. In response, Trump said, “Maybe that’s a question you should ask China. Don’t ask me. Ask China that question, OK?”

Jiang was born in China and immigrated to the United States when she was two years old. Looking shocked, she asked, “Sir, why are you saying that to me specifically?”

The final minute of Trump's news conference this evening pic.twitter.com/m6oGh1q9VF

She pulled down her mask to show her face briefly. “I’m telling you,” Trump said. “I’m not saying it specifically to anybody. I’m saying it to anybody that asks a nasty question.”

“That’s not a nasty question,” Jiang said. “Why does it matter?”

Trump was attempting to ignore Jiang to take a question from Kaitlan Collins, a White House correspondent for CNN, but Collins waited as Jiang asked her followup. This seemed to anger the president even more. Collins approached the microphone and started, “I have two questions—”

“But you pointed to me,” Collins said. “I have two questions, Mr. President. You called on me.”

“I did,” Trump said. “And you didn’t respond, and now I’m calling on the young lady in the back.”

“I just wanted to let my colleague finish,” Collins explained. “But can I ask you a question?”

At that point, Trump abruptly said, “Ladies and gentlemen, thank you very much,” and walked out of the Rose Garden. Jiang tweeted about the incident, sharing another tweet from fellow reporter Yamiche Alcindor, who said that in solidarity, they also stepped back to allow Collins to try again. So Trump was running away from explaining his racism and running away from reporters supporting each other in the bizarre gladiator competition he’s encouraged within the press pool:

.@kaitlancollins allowed me to ask a follow up question after the President called on her, and then @Yamiche deferred to Kaitlin. I am fortunate to work alongside them. https://t.co/aG1F3xYIQO

The president tweeted about the incident as well, once again calling the media “the Enemy of the People” and reassuring his followers that he will be re-elected come November.

The Lamestream Media is truly out of control. Look how they work (conspire!) together. They are the Enemy of the People, but don’t worry, we will WIN in November! https://t.co/3YOSChXP9M

But most people are not impressed:

Pretty pathetic. Mr. Trump is a coward who tears down others to make himself feel powerful. https://t.co/A4HvLyTdpn

Trump proves he is both a racist & a misogynist dick in less than 60 Seconds. Let the @MikeBloomberg Ads begin. https://t.co/658Y1dqWJF

Send in real reporters, and the clowns will run away. https://t.co/JEBEyDitAZ

Yet another reason why Trump doesn’t like masks — he didn’t recognize @kaitlancollins in a mask, and when he realized that he had called on her he stormed off in a huff. https://t.co/NA8lmfdIJp

I would just like to take a moment and note that it is the female journalists consistently calling Trump on his bullshit directly to his face. https://t.co/JlTBxGz4q6

Maybe the best way to end Trump’s meaningless pressers is to actually ask him difficult questions. He can’t stand it.