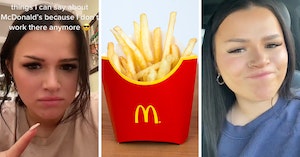 A former McDonald’s worker in the UK is dishing on some of her experiences working at the popular franchise — including why you can’t ever seem to get that McFlurry when you want it.

TikToker @ariesqueen2303 told viewers she hadn’t worked at McDonald’s, or Maccies as she calls it, for about a year. When she did, she was very familiar with the common complaint that the McFlurry machine never seems to be functioning properly. Only, she says in her experience, that’s rarely true.

Rather, the ex-employee said workers would frequently shut the machine off when the store got too busy, or they would say something wasn’t working because they couldn’t be bothered to go grab the mix. Sometimes, there just wouldn’t be enough people on staff to handle it.

She also gave potential customers a couple words of advice.

“If you’re ordering fries, someone’s probably had their hand in, not in your fries, but in the fries,” she said.

Additionally, she said they generally didn’t bother checking receipts when people claimed something had been left out of their meal, and cautioned that anyone dealing with a jerk in the drive-thru line would make sure all the employees knew what was going on.

Obviously every location is a little different from the others, but for the most part, this sounds about on par with what people expected or experienced with McDonald’s in general.

The TikToker also posted a part two, in which she dished about McDonald’s cleanliness, rules around wearing fake eyelashes and acrylic nails, and the hack she used to get “loads of free coffees” while working there.

“As a former McDonald’s employee, all facts tell them gurlll,” wrote @rb_otf._.

“I worked in McDonald’s for 3 years and you are not wrong,” @xotiffanylawrencexo agreed.

While some of this might sound off-putting to potential customers, @ariestqueen2303 suggested that folks not “comment on Maccies workers until you’ve had a Big Mac thrown at your head for being out of BBQ sauce,” which seems like a fair request!