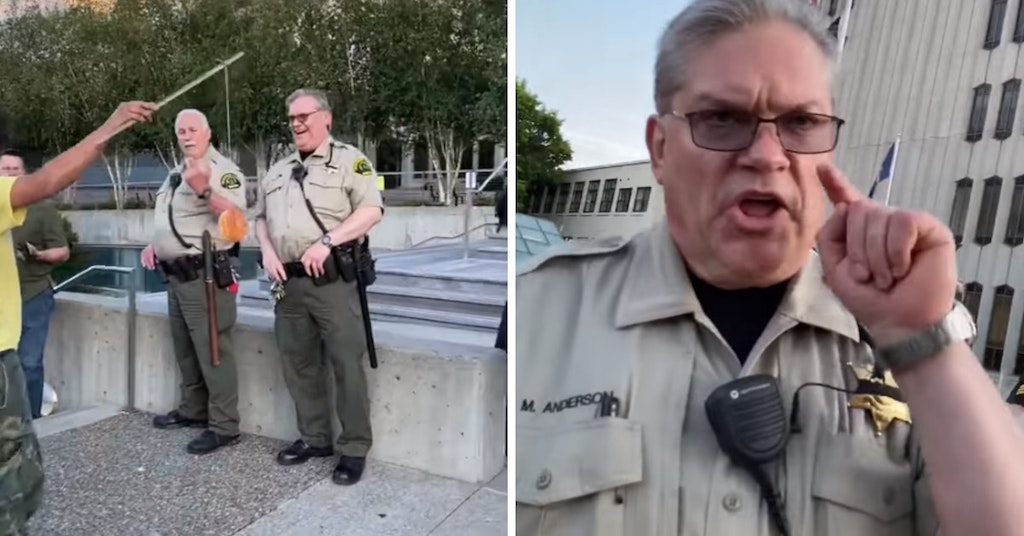 Man Arrested, Charged With Assault After Taunting Police With A Donut


A man of color was shoved, arrested, and charged with 4th-degree assault after he taunted some police officers and their supporters during a “Back the Blue” pro-police rally in Everett, Washington. The incident was caught on film by a local teen, and the footage appears to show that the young man with the donut hanging from a string on a stick did not make contact with anyone, and rather was shoved violently from behind by one of the officers before they arrested him.

According to the Everett Herald, the young man came to the rally as part of a larger counter-protest, with the rest of the counter-protesters staying across the street. The encounter starts amicably, with one of the officers he approached laughing at the sight of the donut, and a cop supporter joking that he’d already eaten “like 10 donuts” before he came to the rally.

Things take a sudden dark turn when the young man again offers the donut, asking if “any of you bootlickers want this,” and a man who turned out to be a police lieutenant in plain clothes tells him to “get that f***ing s**t away from my face or I’ll whoop your a**.”

The individual filming balks at the violent threat. The young man doesn’t move from his spot until one of the other officers, who had been amused a second ago, violently shoves him, causing him to stagger away. He then starts demanding names and badge numbers in order to file a complaint. Instead, one of the officers arrests him, saying “I think it’s time for you to go” to audible jeers from witnesses.

The woman taking the video demands to know what he’s being arrested for and tries to follow them, but the cop who had previously laughed at the donut gag seems to shove or otherwise make contact with her, barking “back off!”

The woman is able to catch up and collect the young man’s name, promising “I got you” while others can be heard shouting “he shoved him,” referring to the officer who shoved the donut guy.

Witnesses and other footage reviewed by the Herald also indicate that the counter-protester never touched anyone or did anything to deserve an arrest or assault charge. The young man was reportedly released after posting $1000 for bail.

Snohomish County Sheriff’s spokesperson Courtney O’Keefe attempted to justify the arrest by claiming that he was “verbally attacking” the pro-police crowd.

“The individual in the video was also intimidating and verbally attacking ‘Back the Blue’ rally attendees as they were leaving the area Friday night,” she wrote in an email.

The police are now claiming that the lieutenant felt threatened by the donut on the stick.https://t.co/adt5686IOF

Donuts are weapons, of course.

Fortney and the rest of the department has to go. https://t.co/jiX0F4DJN9

This defenadnt was ultimately arraigned on the charge of abuse of a donut in the presence of a law enforcement officer.

A series of vicious assaults on law enforcement captured on camera

He was armed with a donut and a skateboard. More than a mere Antifa foot soldier. Probably high ranking because of the donut

He assaulted a cop with a donut? pic.twitter.com/IReyeUrnfa

The man who was arrest has reportedly been contacted by the ACLU.