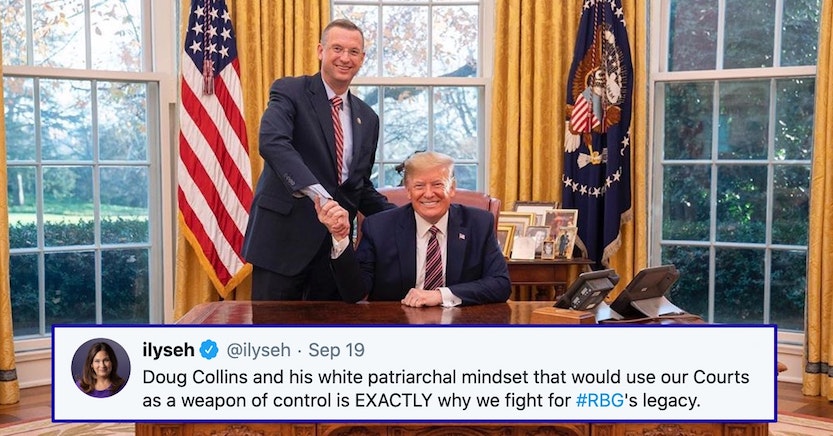 Congressman Doug Collins wasted no time after Ruth Bader Ginsburg’s death to turn the conversation to the Republican anti-choice agenda, tweeting Friday evening in “mourning” of the fetuses that have been aborted in the United States rather than actual human being RBG.

“RIP to the more than 30 million innocent babies that have been murdered during the decades that Ruth Bader Ginsburg defended pro-abortion laws,” he wrote on Friday evening. “With @realDonaldTrump nominating a replacement that values human life, generations of unborn children have a chance to live.”

Despite immediately being called out for the callousness of essentially tweeting in celebration of an icon’s death after she served her country for decades, Collins doubled down the next morning.

“As a pastor and father, the issue of life is deeply personal to me. We’ve got our best chance in decades to strike down Roe V. Wade. Let’s take it,” he tweeted. “@realDonaldTrump is going to nominate a pro-life conservative and the Senate needs to do their job and confirm without delay.”

It didn’t take long for people to start pointing out what has become undeniable through their lawmaking and stances for decades, but especially over the last four years — Republicans are only “pro-life” insomuch as they want all babies to be born but don’t have much regard for their lives beyond that.

But others just straight up dunked on him for being such a terrible person and putting that on full display by tweeting so immediately after the announcement of RBG’s death.

Mitch McConnell has pledged that whoever Trump nominates to take Ginsburg’s place will receive a vote on the Senate floor, despite precedent set by Republicans when it came time to fill the vacancy left by Antonin Scalia during the final year of Barack Obama’s presidency.

So Collins may get his wish. He also may lose his race in the Senate and never step foot in Congress again. Either way, he’s still a ghoul.