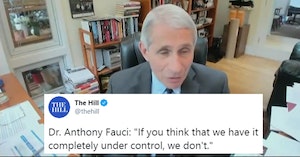 Dr. Anthony Fauci testified today to a Senate panel on the dangers of re-opening the country too early, warning that there could be thousands of unnecessary deaths if we toss aside social distancing and stay-at-home orders before we’re ready. With multiple cities and states looking to lift restrictions without reaching the checkpoints recommended by the CDC and the federal government, he says that these areas could face serious public health and economic setbacks.

“I feel if that occurs, there is a real risk that you will trigger an outbreak that you might not be able to control,” Fauci said. “In fact, paradoxically it will set you back — not only leading to some suffering and death that could be avoided but it could even set you back on the road on trying to get economic recovery. That would turn the clock back rather than going forward.”

Dr. Anthony Fauci tells senators: My concern is that if states, cities or regions disregard our guidelines and reopen too soon, "there is a real risk that you will trigger an outbreak that you may not be able to control." pic.twitter.com/lNSKqWkYsu

Fauci had said in an email to the New York Times that he planned to warn about “needless suffering and death” if the country fails to meet certain checkpoints in its “Opening Up America Again” plan during the hearing.

“The major message that I wish to convey to the Senate HLP committee tomorrow is the danger of trying to open the country prematurely,” he wrote. “If we skip over the checkpoints in the guidelines to: ‘Open America Again,’ then we risk the danger of multiple outbreaks throughout the country. This will not only result in needless suffering and death, but would actually set us back on our quest to return to normal.”

The National Institute of Allergy and Infectious Diseases also said that there is a possibility of a new wave of the pandemic hitting the U.S. in the fall, but hopes that the country will be ready this time.

“I think that the possibility does exist,” Dr. Anthony Fauci says when asked about potential COVID-19 wave in the fall, but hopes that if we do have a second wave, “we will be able to deal with it very effectively to prevent it from becoming an outbreak.” https://t.co/S54sw6ODfp pic.twitter.com/OFsZ5xSpea

In worse news, Fauci also said when pressed by Senator Bernie Sanders that the U.S. death toll is likely much higher than the 80,000 that is being reported due to the number of people who have died from COVID-19 before making it to the hospital. Meanwhile, the panel’s leading Democrat, Washington Senator Patty Murray, raked the Trump administration over the coals for their response to the pandemic.

“Delays, missteps have put us way behind where we need to be on diagnostic tests and allowed inaccurate antibody tests to come to market,” she said. “Corruption and political interference have impeded efforts to secure desperately needed personal protective equipment and promoted dangerous, unproven treatments.”

Sen. Patty Murray: "The Trump Administration's response to this public health emergency so far has been a disaster." pic.twitter.com/TwrKqcLknj

This is going to be a long summer.