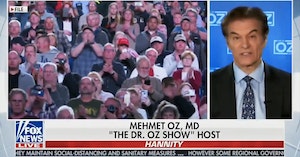 Dr. Oz Thinks American Schools Should Reopen Because COVID Mortality Would Increase “Only 2-3%”

Fox News, the obvious bastion of reality during these fraught pandemic times, has been doing little else than screaming 24 hours a day about how we need to open back up the country and restart the economy—America’s grandparents be damned. On Wednesday night, Sean Hannity welcomed esteemed medical professional Dr. Oz onto this show to discuss that very topic.

And what will undoubtedly come as a great surprise, the avowed proponent of alternative medicine is also very much on board with such a notion.

“Well first, we need our mojo back, let’s start with things that are really critical to the nation where we think we might be able to open without getting into a lot of trouble,” Oz told Hannity.

“I tell you, schools are a very appetizing opportunity,” he continued, using, quite possibly, the poorest choice of words ever. “I just saw a nice piece in The Lancet arguing the opening of schools may only cost us 2 to 3 percent in terms of total mortality, and every life is a life lost, but to get every child back into a school where they’re safely being educated, being fed, and making their most out of their lives with the theoretical risk in the backside.”

DR OZ: "Schools are a very appetizing opportunity. I just saw a nice piece in The Lancet arguing the opening of schools may only cost us 2 to 3%, in terms of total mortality. Any, you know, any life is a life lost, but … that might be a tradeoff some folks would consider." ???? pic.twitter.com/aifMeKTsIv

It might be a tradeoff some folks would consider,” he added. “Maybe get industry back, supply lines, things that we can do without putting the nation at risk.”

It’s hard to know where to even begin in fact-checking that word salad. For starters, the child and adolescent health journal Oz refers to, The Lancet, has seen no shortage of controversy—perhaps most notably, for publishing a 1998 paper that suggested a link between MMR vaccinations and autism.

Not to mention, on the subject of keeping children “safe,” it was widely reported this week that March 2020 was the first March without a school shooting since 2002.

But that’s neither here nor there. By Thursday afternoon Dr. Oz was trending hard on Twitter, as people couldn’t contain their excitement in taking the TV doctor behind the woodshed.

Schools are a what now https://t.co/UqKW4YXABy

Folks questioning Dr Oz's credentials are missing the point. He has ALL THE FUCKING CREDENTIALS and STILL is okay with 2-3% of children in this country dying. That is the fucking problem. My dude is a board-certified, cardio surgery innovator and also trash.

Dr. Oz barbarically argues we should reopen schools b/c it would “only” kill 2-3% of kids

Shame on Fox News for continuing to spew this vicious propaganda#COVID19pic.twitter.com/kkYbUcT3fF

The man is an actual greed monster who doesn't care about scientific facts or human lives. You would literally be better off listening to my mom's friend who thinks vinegar cures Covid-19 because Facebook said so. #truth #covid19 #DrOz

Interestingly enough, variations of the same word kept popping up in many tweets:

my god this absolute ghoul https://t.co/xeL90cZqqq

Imagine being such a heartless ghoul that you think losing *ONLY 2-3%* of children to coronavirus deaths is an acceptable number to sacrifice at the altar of the economy.

How much are YOUR kids worth, #DrOz?https://t.co/YussS7a3KE

he should be stripped of his fucking license. This is ghoulish https://t.co/wez88dvCS6

Unfortunately, Fox News apparently only cuts off Dr. Oz when he’s getting into exceptionally ghoulish territory, like socialized healthcare. Consider his lesson learned!