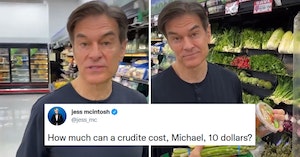 A video produced by the Dr. Oz campaign and published in April has resurfaced and is getting resoundingly mocked by the critics of the candidate for the U.S. Senate as he clumsily attempts to perform the activity that the poors call “grocery shopping.”

Claiming that he needs the ingredients for crudité as requested by his wife, Dr. Oz, full name Mehmet Cengiz Öz, picks up one broccoli, a bundle of asparagus, a whole bag of carrots, and then, for some reason, guacamole and salsa.

Then he complains about the prices of all of these items, found at a store he calls “Wegner’s,” and blames the whole debacle on Joe Biden. As far as anyone can tell, he was either shopping at Wegmans or Redners (unless there is a secret rich people campaign video store called “Wegner’s”)

“My wife wants some vegetables for crudité. Right? So, here’s a broccoli. That’s two bucks. Well, not a ton of broccoli there,” he continues, holding one single stalk.

“There’s some asparagus. That’s $4. Carrots. That’s four more dollars,” he continues. “That’s $10 of vegetables there! And then we need some guacamole. That’s $4 more! She loves salsa, yeah, salsa there. $6? Must be a shortage of salsa. Guys, that’s $20 for crudité! And this doesn’t include the tequila. I mean, that’s outrageous! We got Joe Biden to thank for this.”

Crudité, for those unaware, is simply a French word for a number of sliced vegetables, often carrot sticks or slice bell peppers, with a dip that is typically some kind of vinaigrette or other salad dressing. It is not typical to substitute the dressing for salsa and guacamole, and we’re not sure where the tequila comes in.

Oz is campaigning for a senate seat in Pennsylvania as a Trump-endorsed Republican against Democratic favorite John Fetterman, who is currently serving as the state’s lieutenant governor.

Fetterman has been seeing a lot of success in his own campaign efforts simply by making fun of everything Oz does, which is perhaps low-hanging fruit, but it’s hard to argue with results. The Fetterman campaign has focused on painting Oz as an out-of-touch rich guy from New Jersey, and Oz doesn’t make it hard.

“In PA we call this a… veggie tray,” Fetterman wrote on Twitter. This is true for most of the U.S., at least when you’re poor enough to have to do your own grocery shopping on the regular.

Oz really managed to cement the left-wing perception of him as having way too much money to be able to relate to regular, everyday people, who are widely evoking Lucille Bluth of the hit show Arrested Development.

Although this video has already made the rounds on Twitter once before, it’s good enough for seconds, and we’re betting we’ll see it at least once more before the midterm elections in November.