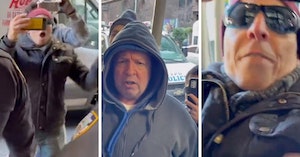 Rightwing protests against drag queens reading books to children have continued, with a group targeting an event last week held at a library for the blind.

The extremists clashed with NYPD and people who showed up to help block aggressive protestors from interrupting a Drag Story Hour at Andrew Heiskell Braille and Talking Book Library in Manhattan on Saturday morning.

Video shared by independent reporter Talia Jane on Twitter shows around a dozen protestors marching up to the library and immediately trying to force their way in, screaming at anyone opposing them.

“Why do drag queens need Antifa protection?” one man yelled over and over again.

According to Jane, the group had caused problems at this particular library before, which the police were aware of at the time. No arrests were made, despite additional videos showing the protestors harassing people coming out of the library and shoving police officers.

New Yorkers passing by reportedly called out the harassment as it went on, and the responses from people online shared that disgust and frustration over this false narrative continuously framing drag queens and the LGBTQ+ community as “groomers” for existing in the same space as children and letting them know it’s okay to be different.

The New York Public Library released a statement reaffirming its commitment to Drag Story Hour, despite the protests.

“The story hour went on as planned, including readings, coloring activities and a ‘dance party’ at the end,” they said. “Our patrons enjoy Drag Story Hour, and the Library will continue to offer programs that support a diverse array of voices. This is particularly important at this moment when we are seeing a rise of hate and violence targeting LGBTQ+ communities.”