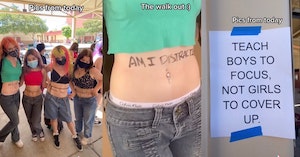 A group of teens at a California high school decided they had had enough with their school’s dress code and staged a protest that’s now going viral on TikTok.

Evita, who goes by @baggyjeanmom, shared video from the day she and some of her classmates decided to brazenly go against the dress code to make a point.

The footage shows girls and boys alike with bare midriffs, tank tops, and notes written across their skin to get their message across. “Distraction” read sharpie across several students’ stomachs.

Pictures of notes posted around campus included a reminder to “Teach boys to focus, not girls to cover up” and “If children’s midriffs distract you, you should not be working with children.”

In a follow-up video, Evita explained that the protest was timed with a school assembly on dress code, and that it was staged due to a number of students feeling that the current dress code “was sexist towards women and also perpetuating rape culture.”

“We, as students, feel like what we wear is not distracting towards others and not effecting anyone’s learning environment,” she said.

While Evita didn’t share many specifics about her school’s dress code policy, there has been an uptick in complaints in recent years over a number of schools constantly pulling students out of class for violating dress code. And these incidents seem to disproportionately effect female students, as dress codes for girls tend to be more strict as well as more subjective to the whims of whichever adult is “distracted” by their tank tops or skirts that don’t go the “right” length below their fingertips.

Students across the country are tired of it, and finding solidarity with others online has given rise to protests and complaints that have sometimes even led to change. And Evita and her classmates seem to be finding that support on TikTok now.

“I mean in University we don’t have a dress code and everything [is] fine and no one is distracted so idk where they get that from,” one user pointed out.

“I don’t get how schools r gonna have mandatory dress codes when we’re required by law to be there,” said another.

One TikToker user really nailed the whole issue by noting that “they can hold an assembly to tell girls how to dress but they can’t have an assembly to educate boys on how they should respect other ppls bodies.”

It’s unclear what immediate change may come from these particular students standing up for themselves, but they’re convinced they’re on the right side of the issue — and it’s hard to disagree.

“We know we’re gonna have a dress code when we get older and possibly have uniforms with whatever job that comes, but right now, we’re in school,” Evita said. “We’re in a learning environment. We should not have to be kicked out of class for wearing a crop top.”