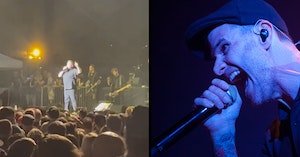 A Dropkick Murphys performance in Pennsylvania over the weekend took a heated turn when one of the band members took the opportunity to blast MAGA “swindlers” and anyone falling for their grift.

Ken Casey can hardly be accused of keeping his politics to himself. He made headlines earlier this year for offering to fight neo-Nazis using one of the group’s songs, and actually fought a fan who did a Nazi salute during one of their shows in the past.

This time around, his frustrations were aimed against anyone still throwing their support behind Donald Trump and his ilk.

“If you were a part of a union or working class people who were allowed to build a better life in the middle class of America, you f—king listen to us, ‘cause if you’re out there buying those f—king hats that these swindlers are selling at that f—king fair… then you’re a part of the problem. And I’ll tell you why — ‘cause you’re being duped by the greatest swindler in the history of the world,” Casey told the crowd.

“You’re being duped by a bunch of grifters and billionaires who don’t give a sh*t about you or your family,” he continued. “They care about their f—king tax breaks and the money they can put in their pockets. If you consider yourself a patriot, and you’re spouting off that election denying sh*t, I will fight your ass outside if you want to. Wake the f—k up!”

As usual, some people immediately jumped to moaning over the idea of politics being brought into music, telling on themselves pretty hard about what kind of music they listen to and/or whether they possess basic comprehension skills.

While MAGA supporters recoiled from the rant, it was widely appreciated by others sick of conservatives claiming to be the party of the people but voting against bettering society at almost every turn.

It doesn’t sound like anyone took Casey up on the offer to fight, but it seems unlikely this will be the last time he makes such an offer.