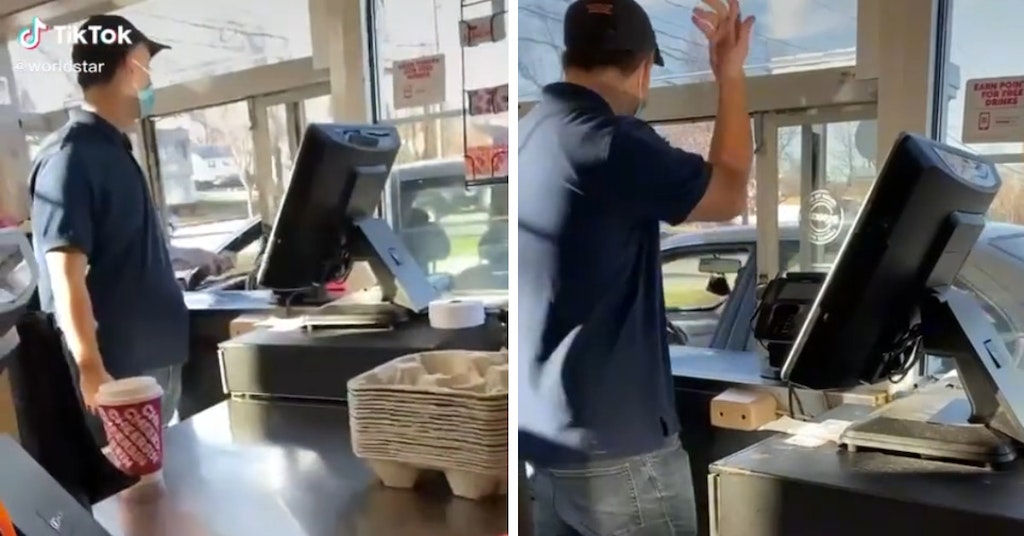 The era of “the customer is always right” appears to be coming to a close, to the unbelievable relief of those who work in the service industry and judging by a recent viral video of a Dunkin’ Donuts employee telling a rude and aggressive customer to “pull up” to the front of the store, presumably for fighting purposes. The footage was obtained and posted by the TikTok account of WorldStar Hip Hop and has become one of their top viral posts, gaining over 2.8 million views in five days.

The 11-second video shows a Dunkin’ worker opening the drive-thru window as the customer in the vehicle at the window is laying on the horn for some reason, presumably from some problem they had with service prior to the video’s start.

The worker holds out the customer’s change, attempting to finish what must have been a nightmare of an interaction.

“You want the money?” he asks repeatedly as the customer continues to honk the horn.

The customer finally stops and snatches the cash in an unnecessarily forceful manner, then seems to make a threatening gesture of some kind, but as it turns out, the worker was angry enough to be into it.

“Pull ‘er up!” he says, slapping the drive-thru counter. “Pull up to the f—ing front! Pull up in the front!”

This has been taken by pretty much everyone as fighting words, meant to encourage the customer to park at the front of the store so they could hash things out in a more equitable situation. It seems unlikely that this happened due to the speed at which the customer peeled out of there, perhaps not as bold of a person as they are while inside of their car and out of reach of a worker who has been pushed too far.

While at another time the worker might have been criticized for not taking the abuse in stride, a new labor movement emerging in the U.S. has pushed back on the idea that underpaid and overworked employees in the service industry need to take bad behavior from customers with a smile. The pandemic has only fueled pro-worker sentiments after many were laid off or forced to quit for their own safety, leaving those left to deal with customers who became increasingly rude, hostile, and violent during this stressful period that is approaching its two-year anniversary.

“[Y]ou cannot demand a service while simultaneously abusing, degrading, or mocking those who provide it,” said another.

Service workers, particularly in fast food chains, have been quitting their jobs at a rate not seen in several decades, leading to many sightings of signs on shop doors and drive-thru boxes informing customers that either the entire store is closed or only being operated by a very small staff. Stories abound of entire stores of workers and their managers quitting on the spot when they simply can’t take the exhaustion of relentless hours and/or the ridiculous abuse of customers another moment longer and walk out en masse, forcing temporary closures of the shop.

Experts have dubbed this phenomenon as well as people quitting in droves out of nearly every other industry the “Great Resignation,” and the effects have already been positive for many workers of underpaid and undervalued jobs. Many companies are now offering higher wages, better benefits, guaranteed holidays off, and hiring bonuses in an attempt to draw workers who are refusing to settle for less. These efforts have proved very successful for those who implement them (and aren’t pulling bait-and-switch schemes), proving the point of the movement to be correct.

At the very least, frequenters of restaurants of any kind need to remember one simple thing if they want to be repeat customers — don’t mess with the folks who handle your food.