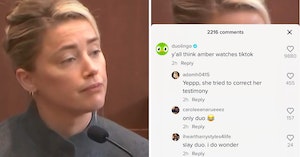 Language-learning app company Duolingo found itself under fire after a social media manager decided to leave a comment on a TikTok video about the Johnny Depp defamation lawsuit trial against Amber Heard, who has accused him of domestic abuse. The comment was short and pithy, asking people if “ya’ll think amber watches tiktok [sic]” on a clip of Heard’s testimony as she was being questioned by Depp’s lawyer posted by NBC.

Whatever that was supposed to mean, some people took issue with Duolingo, a company that has no stake whatsoever in this trial about domestic violence, seeming to make light of the situation. Domestic abuse experts and victims alike have generally expressed alarm about individuals weighing in on this extremely serious issue like it’s just another movie the two are starring in and not a real trial that will have a real impact on other survivors.

Even a public relations and marketing expert, Chris Harihar, expressed dismay over Duolingo’s breaking of an unspoken but very real rule in his industry — stay away from issues like this if they have nothing to do with your company.

“On what planet does a brand – even @duolingo – think it’s cool to crack jokes about an alleged victim of domestic violence?” asked Harihar. “The Depp fandom bubble on TikTok is very real but no brand should get anywhere near it.”

The Duolingo comment was later deleted, and an employee of their social media department came forward to personally apologize for commenting at all. The brand has been known for playing along with memes and other online jokes and generally being a bit more playful than other companies, even leaning into the rumors that the owl will kill you if you miss a day, but this one missed the mark.

“I made a mistake, it’s deleted and I’m listening,” wrote Zaria Parvez. “I’m 24 – a yr out of college – managing an account that I didn’t expect to grow how it did & learning social responsibility on a curve. Taking full ownership. It’s an early career lesson for me and I’m learning to be better.”

While some who say the apology appreciated it, including Harihar, others wondered why Duolingo hasn’t addressed the comment on its main account, suggesting that they are trying to hide the “mistake” in order to avoid bad PR. This is always a risky move, for obvious reasons, but at least the employee herself seems to understand what she did wrong.

Duolingo is not the only company to be called out for weighing in on the defamation trial. No matter which party you personally believe, it remains true that making a spectacle out of an issue as deadly serious as domestic violence like it’s a sporting event only hurts all victims of this kind of abuse. Many media companies have leaned into the loud sections of the public that are lashing out at Heard, ignoring the potential of scaring off future victims from coming forward for fear they’ll be treated the same.

It’s a mess, and a lot of people are understandably disturbed by it all.