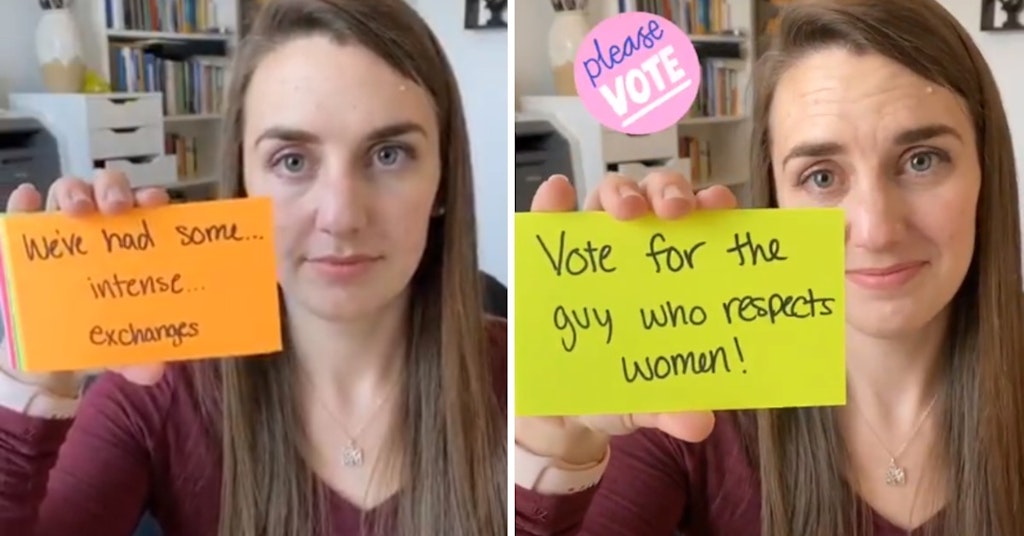 
A young woman’s touching TikTok video is going viral for telling the story of her father, who is dying of aplastic anemia, and how after multiple difficult conversations, he made the decision to vote for Joe Biden and Kamala Harris this year for the sake of his six daughters. One of those daughters told the story using a series of colorful flashcards while she tried, not so successfully, to keep from crying.

According to the flashcards, her dad is expected to pass away in the next few weeks or months.

"My 55-year-old conservative dad has never voted Democrat in this LIFE," she wrote. "We’ve had some intense exchanges about him voting for Trump this year, which has been painful, since we’ll almost certainly lose him in the next few weeks/months."

It's encouraging enough that this family was able to have these conversations during such a difficult time, but the story ends in the best way possible.

"He has six daughters who love him dearly. Yesterday, he was so excited to tell me he’d just voted for BIDEN/HARRIS 2020!!!!," the flashcards read. "Because ‘it matters to my girls and my girls matter to me.’ Vote for the guy who respects women! If my VERY Republican dad can… SO. CAN. YOU."

The video has gained over 800,000 views on TikTok and has popped up on Twitter as well, where it got 5.2 millions more views after being tweeted by director Jay Arnold on Sunday.

Unfortunately, the video also spread to Trump supporters, who mobbed the comments to accuse this grieving daughter of strong-arming her dad into voting Democrat. Plenty of others, however, are moved by the story of a man putting aside his own politics in order to do something that mattered so much to his children and are encouraged by these kinds of stories about people having tough conversations with Republican family members.