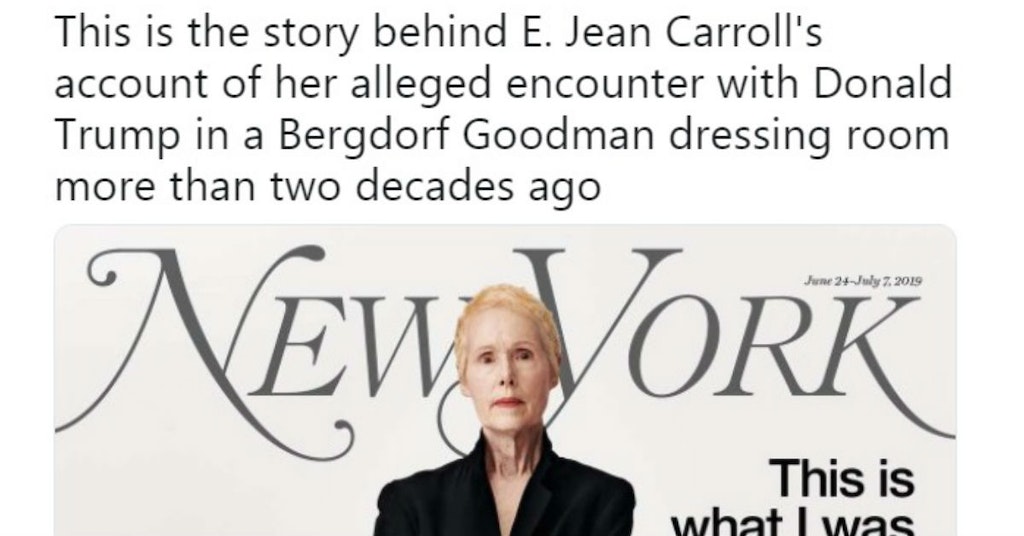 Famed journalist and advice columnist E. Jean Carroll published a brutal cover story in New York Magazine illustrating a number of sexual assaults she endured over the course of her career, including a clear case of rape by none other than President Donald Trump. The assault “allegedly” took place in “late 1995 or early 1996” in a Bergdorf Goodman department store in New York and was recounted by Carroll in graphic detail.

This is the story behind E. Jean Carroll's account of her alleged encounter with Donald Trump in a Bergdorf Goodman dressing room more than two decades ago https://t.co/8GV1bw9cXA

In spite of the story describing what is, by any definition, rape, media outlets are once again using soft language, referring to it as an “attack” or an “encounter.” Make no mistake – this was rape.

Who Is E. Jean Carroll?

Carroll gained fame with her beloved, long-running sex advice column in Elle that first ran in 1993. According to the cover story, Trump recognized Carroll in the department store as “that advice lady” before he raped her. The journalist is also known for her feminist approach to sex, encouraging women to “never never” structure their lives around men. She launched an Ask E. Jean talk show with NBC in 1994 and has written a number of books and her 2002 true crime report “The Cheerleaders” appeared in Best American Crime Writing.

I think we have to be careful here about *understating* what this article says. The accusation in this article is one of forcible rape. "Attack" suggests what the law terms a "simple assault" (a misdemeanor). This, rather, is one of the most serious felonies in the criminal code. https://t.co/o2rmdP9oKp

Today, she’s the woman on the cover of New York Magazine for her story, “Hideous Men,” in which she describes sexual assaults by multiple high-profile men over her life. One of those men was Donald Trump.

What Did Trump Do To Her?

According to Carroll, after approaching her in the department store, Trump said he was there to buy something for “a girl” and asked her to help him. They ended up in the lingerie department and Trump, of course, suggested that she try on a lace bodysuit for him. Carroll tried to laugh it off, as many women do when men put them in uncomfortable situations, but they ended up going to the dressing rooms. It was there that Donald Trump raped E. Jean Carroll.

This is a credible allegation of rape by the president. Full stop. https://t.co/tHBSP4AA1u

The moment the dressing-room door is closed, he lunges at me, pushes me against the wall, hitting my head quite badly, and puts his mouth against my lips. I am so shocked I shove him back and start laughing again. He seizes both my arms and pushes me up against the wall a second time, and, as I become aware of how large he is, he holds me against the wall with his shoulder and jams his hand under my coat dress and pulls down my tights.

The next moment, still wearing correct business attire, shirt, tie, suit jacket, overcoat, he opens the overcoat, unzips his pants, and, forcing his fingers around my private area, thrusts his penis halfway — or completely, I’m not certain — inside me.

Carroll was able to fight Trump off and escape. Rape is defined by the U.S. Department of Justice as: “Penetration, no matter how slight, of the vagina or anus with any body part or object, or oral penetration by a sex organ of another person, without the consent of the victim.”

This is the most serious allegation of sexual violence against Trump ever made (aside from the marital rape claim that Ivana later walked back): https://t.co/Wdm2boOkMY via @intelligencer

Why Did She Wait Until Now To Come Forward?

Women are extremely tired of answering this question, by the way. But according to Carroll, she saw what happened to the other 15 women who accused Donald Trump of rape or sexual assault, and wasn’t eager to share their fates.

“Receiving death threats, being driven from my home, being dismissed, being dragged through the mud, and joining the 15 women who’ve come forward with credible stories about how the man grabbed, badgered, belittled, mauled, molested, and assaulted them, only to see the man turn it around, deny, threaten, and attack them, never sounded like much fun,” she wrote. “Also, I am a coward.”

No you’re not, Carroll.

What E. Jean Carroll describes here is a rape, and it’s clear who the perpetrator is. The President is a credibly accused sexual predator—but misogyny endures. Even Carroll acknowledges, “I run the risk of making him more popular by revealing what he did.” https://t.co/bBhZrvIQF1

How Has The White House Responded?

“This is a completely false and unrealistic story surfacing 25 years after allegedly taking place and was created simply to make the President look bad,” said the White House in a statement. As of this article’s publishing, Donald Trump has not yet tweeted about the allegations, but if he does, we can all predict exactly what that will be like, right?

What Will Happen Now?

Well, if the results of the other 15 accusations are anything to go by, NOTHING. Though some are calling this the most serious sexual assault allegation against Trump yet, if we can’t get him for obstruction of justice, he’s not going down for a crime that has less than a one percent conviction rate.

This is why women are angry.