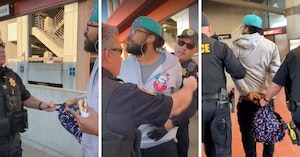 A man Bill Gluckman named was issued a citation for eating a sandwich in a BART station in San Francisco. He shared video of his interaction with police officers on Facebook, asking “Just out of curiosity…has anybody ever got arrested and written a ticket for eating a breakfast sandwich on a Bart platform at 8:00 in the morning. Nobody? Just me? Okay.”

In the video, officers ask for Gluckman’s identity which he refuses to offer, saying they’re singling him out on the platform. Gluckman is black and the officers are white.

“You singled me out of all these people,” Gluckman says.

Gluckman also points out that there are no signs indicating eating is against the rules and adds, “I have no reason to give you my name. I’ve done nothing wrong.”

The video begins at some point into the altercation, the officer is already holding Gluckman’s bag, trying to pull it away from him, so it’s unclear how things began.

He was briefly handcuffed and once he offered his identity, he was released with a citation.

BART issued a statement to NBC, which seems completely unapologetic for how a man was treated over a breakfast sandwich:

“This occurred at around 8am on 11/4 and the man was issued a citation. He was not arrested. He was cited for eating which is a violation of state law. It isn’t just a policy or ordinance, it is penal code.

No matter how you feel about eating on BART, the officer saw someone eating and asked him to stop, when he didn’t, he was given a citation.

The individual was not cooperative and was refusing to provide his name which is needed for a citation and is why the engagement lasted as long as it did.

We have sent the video to the Independent Police Auditor who has confirmed he is reviewing.”

The issue for the many people viewing the footage is how Gluckman seems to have been singled out for doing something everyone has probably done—eating breakfast on the way to work. In protest, several groups have organized “eat ins” where they snack on the platform together:

Petty policing might be a way to keep officers occupied and raise money for the city, but it drives a wedge between the people and the city and leads to dangerous situations. What if no one had been there to film Gluckman being harassed? There’s no knowing how it would have escalated. Over a breakfast sandwich.