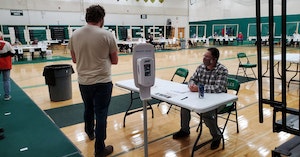 After months of enduring in silence, Tricia Raffensperger, wife of Georgia Secretary of State Brad Raffensperger, spoke with Reuters about the horrifying and explicit death threats she has received from those who believe the 2020 election was stolen from Donald Trump. Screenshots of just a few of the disturbing text messages threatening their entire family have been released and are spreading online.

Tricia Raffensperger is just one of over a dozen individuals interviewed by Reuters who say that they have received threats to their lives in reference to one member’s participation in the electoral process in the U.S. Not only texts, but emails and voicemails have targeted election officials in swing states like Georgia where Trump lost and false accusations of voter fraud have proliferated among the former president’s supporters.

Audio from three threatening voicemails have also been published in the Reuters report.

The family of Brad Raffensperger has been target in particular after he pushed to send out absentee ballots to all registered voters in Georgia, citing the dangers of large gatherings at the height of the pandemic. After Biden won the state, being the first Democrat to do so since 1992, Raffensperger caved to pressure from Trump and ordered a hand recount of the ballots, which found Biden to still be the winner.

Four days before the insurrection at the Capitol, Trump called Raffensperger to pressure him to “find 11,780 votes,” but was rebuffed by the Secretary of State, who later denied Trump’s claims of election fraud and opposed demands for a vote audit from far-right Republicans.

For this, Raffensperger’s family has endured not only threats, but a break-in at their daughter-in-law’s home that they believe was meant to intimidate them. On the same night as the break-in, Trump-loving Oath Keepers were found outside of the house. The entire family went into hiding for close to a week after this incident, and Brad and Tricia have halted regular visits from their grandchildren out of fear for their safety.

“I couldn’t have them come to my house anymore,” said Tricia. “You don’t know if these people are actually going to act on this stuff.”

Beyond high-level officials, average poll workers, who are often unpaid volunteers, have also said that they have received threatening messages from Trump supporters, making some reluctant to return for the next presidential election. This trend has experts worrying about the impact on the health of U.S. democracy, including elections supervisor for Ware County, Georgia, Carlos Nelson.

“These are people who work for little or no money, 12 to 14 hours a day on Election Day,” Nelson said. “If we lose good poll workers, that’s when we’re going to lose democracy.”

The impact of these threats has been even worse for BIPOC poll workers and volunteers, who have endured racial slurs and threats of lynching simply for doing their jobs.

“It was unbelievable: your life being threatened just because you’re doing your job,” said Ralph Jones.

Beyond threats on individual lives, polling places have been threatened with bombings for not handing the election over to Trump. One email in particular was sent to at least 11 counties around Atlanta which predicted “death and destruction” if the former president is not reinstated.

“We’ll make the Boston bombings look like child’s play,” the email read, referring to the Boston Marathon bombing of 2013.

“Until Trump is guaranteed to be POTUS until 2024 like he should be, we will bring death and destruction to defend this country if needed and get our voices heard.”