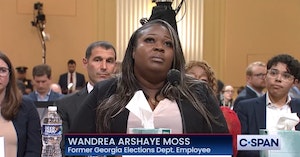 During today’s continuation of the January 6 committee hearings, the chair recognized witness Wandrea “Shaye” Moss, a former election worker in the state of Georgia who endured mass harassment after Donald Trump claimed she was involved in election fraud.

The former president named Moss several times in speeches and social media posts, making false claims that she and her colleagues removed ballots in suitcases and that she was handed a flash drive that was, in fact, a ginger mint.

As a direct result of these lies in service to an attempt to overthrow the legitimate 2020 presidential election results, Moss and her family received numerous and often racist threats and other nasty messages.

“A lot of threats,” Moss said about her Facebook messages after Election Day. “Wishing death upon me. Telling me that, you know, I’ll be in jail with my mother and saying things like, be glad it’s 2020 and not 1920.”

It got so bad that Moss felt compelled to change her appearance and was afraid to leave her home for fears of being confronted by Trump fans if recognized.

“I don’t want anyone knowing my name,” she testified. “I don’t wanna go anywhere with my mom cause she might yell my name out over the grocery aisle or something. I don’t go to the grocery store at all. I haven’t been anywhere.”

The lies, threats, and other harassment also targeted Moss’s mother, “Lady” Ruby Freeman, who was also working at the polls on November 5, 2020, and who sat behind her daughter at the hearing. Freeman testified to the committee prior to the public hearing, and a tape of her statement was played for the audience as she described how the FBI told her that she would need to go into hiding as January 6 approached.

“It was horrible,” she said. “I felt homeless. I can’t believe this person has caused this much damage to me and my family, to have to leave my home.”

Even a year and a half later, Freeman says she still doesn’t feel safe knowing that there’s still a target on her back, considering the fact that Trump and his cronies are still pushing the same lies and have not retracted the ones about her and Moss. Freeman had to leave her home for two months until officials felt it was safe for her to return.

Additionally, Moss’s son received threats in spite of not being involved in election work and reported that a group of people approached her grandmother’s house in an attempt to make a “citizen’s arrest.”

This testimony supported the committee’s conclusion that Trump and his allies worked to put intense public pressure on state officials involved in certifying the election results, hoping to get those in key states to overturn the real results to favor him against Joe Biden. The panel of Democrats and Republicans is attempting to make the case that Trump and key allies should be held criminally liable for conspiring to overthrow the results of a legal and legitimate election.

The next hearing will be held at 3 pm ET on Thursday. The previous Thursday’s hearing argued that the former president and his lawyers, particularly John Eastman, pressured Mike Pence to send the election results back to the key states and turned the mob against him when he did his job. Nobody can say for sure where this will end, but for now, Moss and Freeman have many admirers.