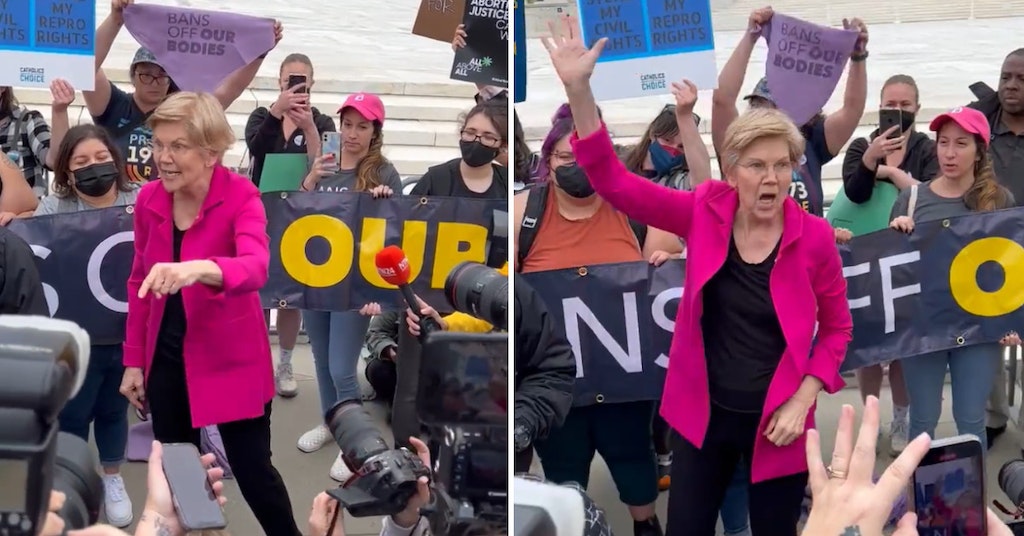 Senator Elizabeth Warren has been making waves since the Supreme Court draft announcing that they voted to overturn Roe v. Wade, which has been predicted since conservatives gained a strong majority on the bench. The decision, expected to be formalized in June, will open up the nation’s 31 Republican-controlled states to pass severe or total abortion restrictions, with several of those states readied with “trigger laws” that ban abortion as soon as the case is overturned.

Warren was spotted in front of the court steps on Tuesday visibly shaking with anger, and confirming to reporters that she was indeed furious, and has since been rallying with pro-choice activists and delivering righteous speeches demanding that Congress act.

Later on Tuesday, Warren gave a speech expressing her fury over the fact that this reversal of law will have little to no impact on rich women, but would be devastating for the most vulnerable people in the country. As she spoke, her voice shook, demonstrating that she is truly upset and angry over these developments.

Warren called on her party to do what is necessary to encode abortion rights into federal law, which would be possible if Democrats senators finally gained full support for ending the filibuster. This would require pressuring the last holdouts, including Senators Kyrsten Sinema and Joe Manchin, which is actually something that political parties can and will do if they feel like doing it.

“Understand this,” she concluded. “I have seen the world where abortion is illegal, and we are not going back. Not ever.”

Though pro-choice rallies erupted across the nation on Tuesday and other Democratic politicians have come out strongly in favor of protecting the right to privacy and bodily autonomy, many worry that they will not be able to pass a law to this effect. There is one drafted, called the Women’s Health Protection Act (though trans men, non-binary people, and others are also affected), which has already passed the House.

Unfortunately, the Democrat’s recent inability to even get Joe Biden’s promised and hyped Built Back Better bill passed has left their constituents skeptical that they can stop the one thing they’ve promised for five decades would never happen.

On the streets, however, Warren’s strong words are inspiring people to keep fighting no matter what.