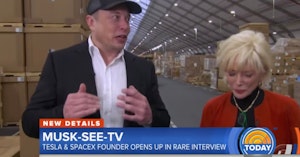 Defying California’s shelter-in-place orders, Elon Musk reopened his Tesla facility on Monday, increasing tensions between the billionaire and both residents and state officials.

Musk had been complaining about Alameda County’s restrictions for some time now, calling the requirement for his factory — and many other non-essential businesses—to stay closed unconstitutional.

So in a brazen display of privilege befitting a white male billionaire, the CEO decided rules don’t apply to him and told his employees to report to work in the middle of a pandemic, regardless of the consequences.

“Tesla is restarting production today against Alameda County rules,” he wrote on Twitter. “I will be on the line with everyone else. If anyone is arrested, I ask that it only be me.”

Of course, Musk didn’t get arrested, and instead Alameda officials have announced that they are working with him to come to some sort of arrangement.

“We continue to move closer to an agreed upon safety plan for reopening beyond Minimum Basic Operations by working through steps that Tesla has agreed to adopt,” the Health Care Services Agency said in a statement on Monday afternoon. “We look forward to reviewing Tesla’s plan and coming to agreement on protocol and a timeline to reopen safely.”

Musk’s refusal to comply with regulations caused an uproar online.

Though many just see this as business as usual for Musk.

Tesla’s California location is no stranger to excessive safety violations, and Musk has been accused of union busting in the past. So the fact that he seems more concerned about getting back to business than making sure his employees are safe hasn’t really surprised anyone paying attention.

Musk has also threatened to take Tesla out of California if officials don’t bend to his wishes.

“Frankly, this is the final straw,” he tweeted over the weekend. “Tesla will now move its HQ and future programs to Texas/Nevada immediately.”

Both Texas and Nevada have been more lax in their coronavirus safety measures than California. But as Musk is known for tweeting all sorts of absurdities with no follow through, there’s no way to know if his threat should be taken seriously.

He did, however, file a lawsuit against Alameda County on Saturday in an attempt to invalidate the orders that require Tesla to stay closed at this time.

Though it seems Musk isn’t particularly concerned with county regulations, either way.