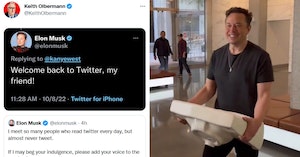 New Twitter CEO Elon Musk would very much like you to believe that Twitter is doing just great under his rule, just fantastic, engagement is up and everything, people tweeting more than ever, and he’s definitely not losing a ton of money on the unprofitable platform he bought.

But also, he is out there literally begging people to tweet more, but surely it’s only because he is such a fan of public dialogue. Pay no attention to all the left-wing accounts being banned for no reason.

“I meet so many people who read twitter every day, but almost never tweet,” Elon posted Thursday morning. “If I may beg your indulgence, please add your voice to the public dialogue!”

One thing most people have known about Twitter for some time is that the vast majority of tweets come from a relatively small number of accounts, with most people content to simply read the news, opinions, and jokes without posting much themselves. There are also a large number of dead accounts sitting around as people leave without bothering to deactivate.

According to a study published by the Pew Research Center in 2019, only around 10 percent of Twitter’s adult users are responsible for about 80 percent of all tweets on the platform. The median user doesn’t engage much at all, only posting an average of two original tweets and giving out one “like” per month.

This lack of engagement isn’t great when it comes to appealing to advertisers, who are currently either ditching Twitter or have paused their ads on the website in large numbers. Around half of the platform’s top advertisers have nearly or entirely stopped posting content and Twitter is now reportedly losing around $4 million per day.

Appealing to unengaged Twitter users doesn’t seem like it will fix this problem, however, since what actually prompted companies to pause ads was worries over what Musk would do with the website, considering his reputation. They were then mostly kept away by reports that hate messages massively spiked almost immediately after he took over, followed by problems with impersonator accounts resulting from his disastrous $8 blue check idea.

This recent begging tweet from Musk further appears to expose that the man has no idea how Twitter works in spite of the insistence by his rabid fans that he’s some kind of a tech genius rather than an emerald mine heir who simply buys other people’s ideas.

In between Musk suck-ups and the usual spam bots, there have been some sincere responses to his plea, which seem to reveal that most of these Twitter users have no friends and/or are adding nothing of value to the “dialogue,” so no one engages with them.

Then there were the obvious right-wing accounts claiming that people don’t tweet because they’re afraid of being “silenced,” which makes no sense because if you’re not tweeting, then you’re already silent on Twitter? Seems a lot more likely that no one was listening in the first place because you have no followers and nothing interesting to say.

There are clearly plenty of people who are not afraid of “being silenced” on Twitter as folks continue to mock Musk en masse.