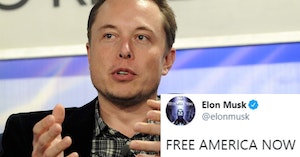 Tesla CEO and everyone’s least favorite eccentric billionaire Elon Musk has added his voice to the call to end stay-at-home orders in various U.S. states against the advice of the vast majority of public health and infectious disease experts. After tweeting out the vague call to “FREE AMERICA NOW” on Tuesday, he went on a whole tangent during a call with investors about the company’s quarterly earnings.

“The extension of the shelter in place or frankly I would call it ‘forcibly imprisoning people in their homes against all their constitutional rights’—that’s my opinion—and breaking people’s freedoms in ways that are horrible and wrong and not why people came to America or built this country,” he said to some guy who was just asking about Tesla’s liquidity. “What the f***? Excuse me. Outrage.”

Tesla and SpaceX CEO Elon Musk called stay-at-home orders meant to slow the coronavirus pandemic "fascist" and likened them to "forcibly imprisoning people in their homes" during a Tesla earnings call. https://t.co/lY97Rm9Rw0

When someone actually asked about the effects of the pandemic on the company, he used the other F-word.

“But to say they cannot leave their house and they will be arrested if they do, this is fascist. This is not democratic. This is not freedom. Give people back their goddamn freedom.”

Sounds like someone’s losing money. At the very least, Musk is worried about that, as he expressed when he first started answering the question about liquidity.

“We are a bit worried about not being able to resume production in the Bay Area. And that should be identified as a serious risk,” he said. “We only have two car factories right now: One in Shanghai and one in the Bay Area, and the Bay Area produces the vast majority of our cars.”

Few members of the public have any patience for these latest antics by Elon Musk, especially after he spent much of the months leading up to the pandemic downplaying the seriousness of the novel coronavirus and making irresponsible, Trump-like suggestions about drugs that hadn’t been tested on the virus yet.

Meant to say other forms of “the cold”, not influenza https://t.co/38sqqL3f7i

The coronavirus panic is dumb

When a follower pointed out that Musk is “losing followers and respect,” the billionaire retorted, “Bon voyage.”

After all that, as well as after years of living under an administration that has repeatedly and heavily flirted with actual fascism, reasonable people are 100 percent done with Elon freaking Musk.

Beyond the headline and the F word there is a lot in this article capturing Musk’s brand of predatory entitlement, lying and general awfulness. https://t.co/bLzAN4p1r3

He is willing to risk workers’ lives to get his $725 MILLION stock option windfall. He doesn’t give a shit about anyone. Yet the protective laws are fascist. Yeah, right. @elonmusk is garbage. #boycottTesla https://t.co/0Ey2ehm3Ep

Rich guy wants you to die so he can make more money.

Freedom is not the right to do as you wish without constraint or consequences. You are not ‘free’ for example, to kill your neighbour or drive recklessly. Americans never seem to get this, the same way they do not get gun control and universal health. #ElonMusk #COVID19

Amazing how many people don’t know what fascism is, what fascism means… anything about the history of fascism.