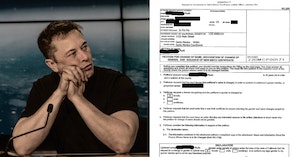 Elon Musk’s 18-year-old daughter recently filed paperwork with a Santa Monica court to change her name and correct the gender on her personal identification documents, revealing to many who didn’t know that she’s a trans woman.

According to media sources, her name is now Vivian Jenna Wilson, taking the maiden name of her mother to change it from the billionaire’s last name and changing her gender marker to female.

Musk does not have the best relationship with trans people, having occasionally tweeted out transphobic nonsense about pronouns, especially after his former girlfriend Grimes reportedly left him for Chelsea Manning, who is also a trans woman.

Now, people are wondering whether the details on this legal paperwork have something to do with his daughter being trans, especially when you see the reason she listed for the legal name change.

Where it asks the petitioner to give the reason for the change, she wrote: “Gender identity and the fact that I no longer live with or wish to be related to my biological father in any way, shape or form.”

The documents were submitted to the court back in April, but having this come out right after Father’s Day has got to be a blow to Wilson’s dad, though that would be a tough thing to find out on any day of the year.

Of course, if Musk didn’t want to lose his trans child, he might have considered not being publicly transphobic, particularly during a time when those who are paying attention are sounding the genocide alarm due to extreme anti-trans rhetoric from conservatives.

Vivian’s mother Justine, on the other hand, seems to be very supportive of her daughter and this new step in her young life, posting about a brief conversation they had about turning out so normal, considering.

The court hearing on Wilson’s name and gender marker change will reportedly take place this Friday, and includes a request for a new birth certificate that reflects the newly accurate information.

If it wasn’t already, Musk may have ruined his relationship with his daughter back in 2020 when he tweeted the bafflingly ignorant statement “Pronouns suck,” drawing acclaim from his many transphobic fans. Grimes’ response, back when they were still together, is now an internet meme and a common response to people posting weird and nonsensical statements.

“I love you but please turn off ur phone or give me a [c]all,” Grimes said. “I cannot support hate. Please stop this. I know this isn’t your heart.”

Apparently it was his heart, as he continued to make low-punching posts attacking pronouns and trans people until Grimes left him. In December of the same year, he tweeted “I absolutely support trans” while leaving the word “people” out of the equation (which is much less grammatically correct than the use of alternative pronouns) and said “but all these pronouns are an aesthetic nightmare.”

This might have sent to message to his trans daughter that he cares more about aesthetics than trans people, whom he doesn’t seem to want to even call people.

Hopefully Wilson can now live her best life free of her father and able to be herself. Meanwhile, Musk’s critics will take care of the task of rubbing it in his face.