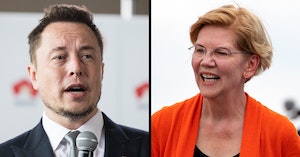 Elon Musk is once again demonstrating how incapable he is of handling reality after lashing out at Elizabeth Warren like a little baby after she suggested he pay his fair share of taxes.

After the billionaire, who spent the better part of 2021 stirring up drama on Twitter and focused on space rather than the place where humans actually live, was named Time’s Person of the Year, Warren sent several tweets with the same premise — that the ultra-wealthy should pay more taxes.

Being called out never sits well with Musk, and he threw a public tantrum in response, calling Warren “Senator Karen” and comparing her to a friend’s “angry Mom” who “would just randomly yell at everyone for no reason.”

Of course, Warren is not yelling and there’s a perfectly good reason she’s speaking about Musk. But writing a political discussion off as the rantings of a hysterical woman is a lot easier than engaging in an actual conversation about why billionaires like Musk keep raking in money hand over foot while middle and lower-class Americans are suffering — something that could be alleviated with government programs funded via taxation.

If this whole premise of Musk throwing a fit over being asked to pay more taxes sounds familiar, it’s because this is a repeat of an incident with Bernie Sanders not too long ago. And while Musk’s fanboys egged him on in both instances, other people were, once again, annoyed with his childish drama.

Once again, it seems like Musk could benefit from some time away from social media, but as long as he’s got enough people laughing along with his little fits and boosting his ego, it seems likely we’re stuck with him. But that means he’s also stuck with people like Warren and Sanders who are more concerned about the interests of those struggling to make ends meet than some billionaire who wants to jet off into space.