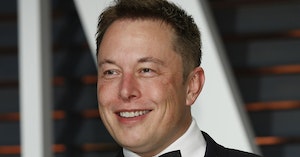 Though Musk has been happy to let the people vote (aka his followers and anyone else who happens to see his polls within the short period of time they are available) as to whether certain people like Donald Trump should have their Twitter accounts restored, he previously made it clear that he had no intention of allowing conspiracy theorist Alex Jones back on the platform.

“My firstborn child died in my arms. I felt his last heartbeat. I have no mercy for anyone who would use the deaths for children for gain, politics or fame,” he tweeted, referencing Jones using his platform to spread lies about the Sandy Hook elementary school shooting.

Jones was deplatformed for a reason, but it’s extremely telling that Musk is willing to draw the line at something that he feels personal outrage towards but not say, someone actively threatening to undermine democracy itself or spewing hate. It also seems to acknowledge that Musk’s claim to be a champion of free speech (without understanding what that actually means) has its limits — completely subject to his own personal whims, of course.

But aside of all that, the event Musk called up to explain his position on Jones may not have happened the way he said.

His ex-wife, Justine Musk, called his account into question in a tweet after somebody asked whether their son, who died in 2002, had died from SIDS (sudden infant death syndrome).

She replied that a SIDS-related incident had put him on life support and he was subsequently declared brain dead.

“And not that it matters to anyone except me, because it is one of the most sacred and defining moments of my life, but I was the one who was holding him,” she added, giving an identical account of her son’s death as she has previously over the years.

Whether or not a parent held a dying child in their final moments doesn’t change the pain of such an immense loss, which is what makes it particularly strange that Musk would allegedly lie about such a thing.

There is plenty more to say about Musk’s alleged treatment of his ex-wife, as well as her claims about the time following their son’s death, but the idea that Musk is doing exactly what he noted Jones did is plenty disturbing in and of itself. But when you’re rich enough to buy entire popular social platforms to decide who can or can’t use them, maybe you don’t have to spend much time worrying about the truth.