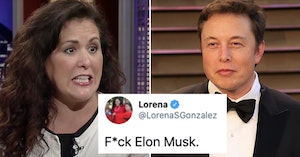 On Friday, California Gov. Gavin Newsom decided manufacturers in the state would be allowed to reopen for production, beginning to ease off stay-at-home orders. Alameda County, where the Tesla factory is located, has plans to remain closed until the end of May, allowing only essential businesses to remain open, according to Newsweek. This has really pissed off billionaire Elon Musk, who is pretty used to getting his way. In fact, Tesla was specifically warned to remain closed by the Alameda County Health Department because Musk sent an email to employees on Thursday afternoon to tell them to gear up for work.

In response, Musk announced a lawsuit on Twitter and plans to move Tesla out of the state.

Frankly, this is the final straw. Tesla will now move its HQ and future programs to Texas/Nevada immediately. If we even retain Fremont manufacturing activity at all, it will be dependen on how Tesla is treated in the future. Tesla is the last carmaker left in CA.

The response on Twitter has been considerably more critical of Musk than usual, but the eye-catching tweet came from Assemblywoman Lorena Gonzalez, of San Diego, who wrote a very simple message to Musk on Saturday:

It’s rare for someone in government to use such strong language, and many people took offense, but many more seemed enthusiastic about it. I’d say Gonzalez’s response to one San Diegan explains why she got straight to the point.

“I’m tired of subsidizing a company that continues to put workers at risk, union busts & bullies public servants,” she wrote. “Strange partnership. But, I probably could’ve expressed my frustration in a less aggressive way. Of course, no one would’ve cared if I tweeted that.”

Understood. I’m tired of subsidizing a company that continues to put workers at risk, union busts & bullies public servants. Strange partnership. But, I probably could’ve expressed my frustration in a less aggressive way. Of course, no one would’ve cared if I tweeted that.

The lawsuit was filed in federal court on Saturday, and in it, Tesla claims the facility should be considered “critical infrastructure,” and thus allowed to open. It characterizes the public health efforts Alameda county as “power grab.” Tesla has been arguing that they should be allowed to remain open ever since lockdown in March and didn’t suspend production until March 23.

Musk has been vocally contemptuous about the pandemic response since the outset, calling it a “panic” and “dumb.” He seems to be aligned with Donald Trump’s feeling that harm to the economy is the real threat, though over 70,000 people have died from COVID-19 in the last few months. He also has a history of announcing things on Twitter that severely affect his business, like claiming stock prices for Tesla should be lower. In this instance, Musk basically told who knows how many employees that their entire livelihood might be about to end. Or that they’re moving to whatever state Musk intends to take over next.