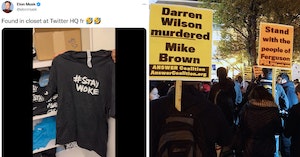 Elon Musk continued to show that he is far from politically neutral or centrist and is in fact more like every right-wing Trump fan you’ve ever had the misfortune to come across on Twitter with a video he posted on Tuesday.

He apparently came across a storage room in the Twitter headquarters, and took the time to film a stockpile of t-shirts sporting #StayWoke on the front. This elicited much laughter from Musk, in video giggles and cry-laughing emojis.

What Musk is laughing at here is a 2016 initiative by the Twitter team under Jack Dorsey in response to the increasing number of high-profile police killings of unarmed Black men and other people of color, as well as to support Black Twitter workers and users.

The shirts were designed by the company’s “Blackbirds” group in order to “support and promote diversity at Twitter, create a more inclusive work environment, and enrich communities outside of Twitter.”

According to New York Times tech reporter Ryan Mac, Dorsey was proud of the initiative, wore the shirts around the office, and took the time to visit Ferguson after the killing of Michael Brown by police officer Darren Wilson in 2014.

Though the video tweet remains, Musk has deleted a follow-up tweet which was much worse, pushing the right-wing talking point that the entire outrage around the murder of young Michael Brown was manufactured.

“Obama’s own DOJ proved this [and] exonerated the cop,” the deleted post read. “‘Hands up don’t shoot’ was made up. The whole thing was a fiction.”

The U.S. Justice Department under Obama did find that Wilson killed Brown in self-defense. The former administration also had a list of strong criticisms for the Ferguson police department for the way they handled the killing and their response to the protests that followed.

All slogans are “made up,” but “hands up, don’t shoot” remains a common refrain at anti-police brutality demonstrations in order to highlight that many police murder victims are unarmed or even have their hands in the air when they’re shot. It also challenges the cops who are always out to suppress these protests in riot gear, demonstrating the power imbalance and disproportionately violent response that has became characteristic of U.S. police.

Though there has been debate over whether Brown had his hand in the air at the time he was shot by Wilson, saying the “whole thing was a fiction” has rightly angered many anti-racists and further exposed Musk’s right-wing ideology, deleted or not. Though the deletion hints that even Musk knows he showed a bit too much of his true colors, and also apparently that he doesn’t understand Twitter. They always get the screenshot.

Musk did get a positive response from the right-wing venture capitalist he brought in to “advise” him while he systematically destroys Twitter, one David Sacks, who also found the idea of speaking out against racist police brutality to be hilarious.

As Mac points out, Sacks does not have a great track record when it comes to race. Sacks wrote the book The Diversity Myth, which attacked anti-racist efforts on college campuses and was so racist even he eventually apologized for it. It’s unclear exactly how sorry he was for the part that called campus date rapes “belated regret.”