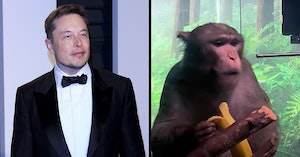 You know that computer chip Elon Musk hopes to implant into people’s brains? Turns out, it’s not working so well for the monkeys.

The Physicians Committee for Responsible Medicine (PCRM) came forward recently with allegations that the monkeys Musk’s company, Neuralink, used to test their product on between 2017 and 2020 were subject to what amounted to torture.

Specifically, they claim rashes, brain hemorrhaging, and self-injury followed the implant in the 23 test subjects over those years. Perhaps most notably, 15 of those monkeys are now dead, with some having to be euthanized due to complications.

The official complaint lodged by PCRM against the University of California Davis, which housed the Neuralink-owned monkeys during the experiments, paints a very different story from the one we’ve heard from Musk and Neuralink as they march towards human trials.

Instead, we just keep seeing this video of a monkey playing ping pong with his brain:

That’s cool and all, but less so if it ends up in death.

People have long expressed skepticism over the idea that a guy who can’t even build solid cars is going to be reliable when it comes to brain implants, and this news about the monkey experiments hasn’t restored any faith at all.

Musk claimed in December 2021 that he hoped Neuralink would start implanting the chip into human subjects by this year.

“Neuralink’s working well in monkeys, and we’re actually doing just a lot of testing and just confirming that it’s very safe and reliable, and the Neuralink device can be removed safely,” he said.