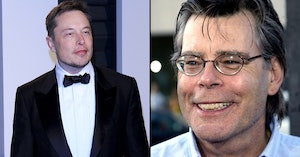 Elon Musk taking charge of Twitter has been a dumpster fire from before it even began, and news that he might start charging verified users a whopping $20 per month to keep their blue checks is the latest potential change to the platform to drum up drama — and even Stephen King is weighing in.

The acclaimed author was forthright in his feelings about the idea that people should fork over more cash than they do for a streaming service in order to stay verified, writing, “F—k that, they should pay me. If that gets instituted, I’m gone like Enron.”

The idea behind blue checks is simply to verify the identity of someone who is enough of a public figure or brand that they might be impersonated by a fake account. It helps stop misattribution and the spread of misinformation, and the intent behind it was never to be some exclusive premium Twitter club — that’s why Twitter has a wholly separate premium subscription option in Twitter Blue that has nothing to do with being verified.

But Musk is all about the monetization, and responded to King’s tweet with the hilarious claim, “We need to pay the bills somehow!”

“Twitter cannot rely entirely on advertisers,” he added. “How about $8?”

Claiming that Twitter can’t rely on advertisers certainly adds fuel to the belief that Musk is going to turn Twitter into a land where hate speech runs even more rampant, all under the guise of “free speech.” It also reminds us that Musk doesn’t seem to care about the things that could go wrong if people are no longer immediately sure which accounts claiming to be high profile people are real and which are not. Shocking, just truly shocking.

The Tesla CEO is already getting clowned on by people pointing out just how clueless he is trying to “negotiate” with King over a price point.

Somehow, having loads of money doesn’t make you innately well-equipped to run any company in the world, and it doesn’t take a genius to figure out we’re in for an extremely rocky ride with Musk taking over Twitter — assuming he doesn’t completely burn it to the ground in the first six months. But with popular users like King already looking at leaving, it doesn’t bode well for the future of Twitter as anything other than a perpetually decaying rightwing cesspool.