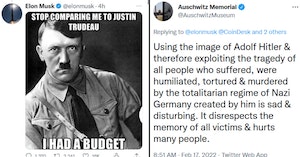 Elon Musk outdid himself in the field of bad tweets earlier today when he responded to the news that Canadian authorities have issued an order to banks and other financial institutions to block cryptocurrency donations to the anti-vaxxer trucker convoy by comparing Prime Minister Justin Trudeau to Hitler. Further, in that comparison, Hitler managed to come out ahead.

“Stop comparing me to Justin Trudeau,” reads a meme image of Adolf Hitler. “I had a budget.”

What a “budget” has to do with any of this is lost in the pure malice necessary to compare a man trying to block right-wing donations fueling what is arguably an attempted coup of the Canadian government to the architect of the Holocaust and finding the latter to be the better guy.

Musk soon deleted the tweet, but of course not before people captured screenshots, and has not addressed the issue on Twitter so far, opting instead to spout meaningless platitudes about love after praising one of the most iconic figures of deadly hate known to humanity.

Reasons to hate Elon Musk certainly are easy to remember.

The so-called “Freedom Convoy” in Ottawa has finally calmed after weeks of tension between the right-wing protesters, joined over time by far-right groups up to and including neo-Nazis, and hostile locals who quickly tired of late-night honking sessions and general harassment. Originally blocking off the Ambassador Bridge, which accounts for around 25 percent of trade between the U.S. and Canada, the bridge has finally been cleared and protest crowds scattered by online vigilantes who infiltrated and disrupted the protesters’ organizing with the help of a porno-metal song called “Ram Ranch.”

Still, the protest continues across the city and has spread to other parts of the country as right-wingers continue to demand an end to all COVID-related mandates in Canada, all without enduring the police brutality well known to Indigenous Canadians who protest oil pipelines on their land.

This tweet was not taken well by the political left in either Canada or the U.S., but the reaction was nothing compared to his tweet comparing Trudeau unfavorably to Hitler. This may be almost as bad for Musk’s reputation as the news that his Tesla factories are also racism factories, where Black workers are segregated, given the worst jobs, and face horrifying and constant racist harassment.

If the Auschwitz Memorial has to chew you out, you’ve really messed up.