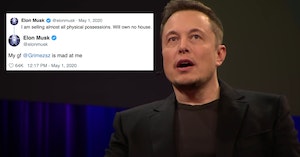 People are really losing it in quarantine, but it feels like Elon Musk’s giant piles of money should be serving as some sort of buffer. He could afford to pay everyone around him to pretend like things are normal and just smoke a spliff in his pool-sized hot tub. Instead, he appears to be having a total meltdown on Twitter because he can’t make unaffordable cars in his factories and everyone keeps making fun of him for not knowing what a ventilator is.

Musk has been all over the place. He took a hit at his own company, claiming Tesla stock prices are too high:

He has been calling for the end of the coronavirus lockdown:

The coronavirus panic is dumb

Now give people back their FREEDOM

And claimed he’s selling off all his possessions:

Just one stipulation on sale: I own Gene Wilder’s old house. It cannot be torn down or lose any its soul.

If he were just a regular weird uncle, none of that would matter too much. Unfortunately for society, Musk has a lot of influence as a billionaire who delusional nerds think will be an IRL Batman someday. My guys, have you seen how your hero is taking care of himself? He ain’t jumping from one roof to another anytime soon.

People have been noticing Musk’s meddling, starting with Tesla stock taking a dip after his tweets:

Holy crap. How did @elonmusk time this stock call so well? He nailed it almost to the second. (Chart via @lorcanrk) pic.twitter.com/Bu1pRfzzuO

And his girlfriend Grimes is definitely noticing:

My gf @Grimezsz is mad at me

My [48M] girlfriend [32F] is mad at me because I melted down on Twitter, promised to sell almost all of my physical possessions (including our house), and may have violated SEC regulations. AITA? pic.twitter.com/3QJPA65Pwb

She is currently carrying their child, so maybe the idea of raising a baby in an empty house that once belonged to Gene Wilder with a man deliberately testing the limits of his success isn’t too appealing.

Baby due on Monday

Maybe it’s incipient fatherhood that is making Elon Musk more Musky than usual. He’s having a last weekend of smoking up and trolling his followers online before getting serious about being a dad.

Or maybe he’s just so disgustingly rich that he knows nothing can touch him, not even endangering jobs at his company and lives in the world around him. Very un-Batman of him.