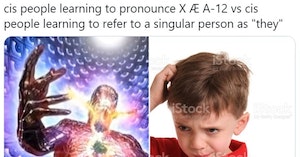 Elon Musk’s Tweet About Pronouns Gets Eviscerated For Hypocrisy

Elon Musk, CEO of Tesla and man who fought to keep his plants open to make overpriced cars during a pandemic, randomly tweeted an inscrutable image about people putting certain pronouns in their social media bios. The image appeared to be of a dramatic Revolutionary War painting topped by a cartoon of a British soldier smearing what might be blood on his face with a hat that says “I love to oppress.”

We have not yet been able to find an explanation for what’s on the teacup hanging from the redcoat’s pinky.

It’s also generally unclear why Musk has an issue with he/him pronouns specifically or what anything in the image has to do with them. Seriously, is there a person on planet Earth who can explain this?

The best anyone can figure is that Musk seems to have an issue with people declaring their pronouns, which is a common quality among the far-right, who often seem to be obsessed with this minor aspect of grammar.

“I immediately ignore anyone with pronouns in their bio as unimportant, uninteresting, or unaccomplished,” commented HINDLE, who likes to retweet Donald Trump a lot.

Musk did respond to an article calling him out for attacking trans and non-binary people who may have different pronouns than some might expect, but he only dug himself deeper.

“I absolutely support trans, but all these pronouns are an esthetic nightmare,” he wrote.

First of all, “trans” is an adjective and not a noun, and referring to trans people this way is considered dehumanizing. Secondly, people have something to say about what is and is not an “esthetic nightmare.”

Musk is going to have a real hard time if he can’t even figure out the pronoun “he.” But he’s posting incel memes and blowing up rockets, so clearly he’s coping well.