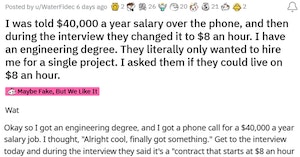 Another entry to the “Antiwork” Reddit forum illustrates how extreme some of those bait-and-switch job advertisements can be, and that they’re not just happening to people interviewing for jobs at fast food restaurants. The Redditor, who has a degree in engineering, applied for a job at a company asking for precisely these skills and offering a $40,000 salary, which is still pretty low pay for an engineer. However, during his interview, the pay rate somehow plunged to barely more than federal minimum wage.

“Okay so I got an engineering degree, and I got a phone call for a $40,000 a year salary job. I thought, ‘Alright cool, finally got something,'” the Reddit user says. “Get to the interview today and during the interview they said it’s a ‘contract that starts at $8 an hour for 9 months,’ and then after that they ‘may consider the $40,000 a year, salaried.'”

Translation: They will not consider the $40,000 a year, salaried.

While many in similar situations simply completed their interviews and then refused the job when offered, this engineer says they called out their interviewers immediately.

“I asked them, ‘Okay, so if I hired you for $8 an hour right now, to work at my company, could you live off of that? I’m worth $40,000 a year. I have experience, knowledge, and skills. You’re paying me for those things, not just the work that needs to be done. That’s not a negotiation.'”

One of the interviewers, who was described as an “older guy,” shot back that he “started off at $2 an hour washing s–t off of chicken eggs.” This is a common type of out-of-touch, often Baby Boomer response to complaints about low wages people apparently they don’t understand the concept of inflation. If the interviewer had enjoyed that job in 1970, $2 an hour would be equivalent to being paid $14.33 an hour in 2022 — to wash s–t off of chicken eggs, which probably didn’t require an expensive college degree.

The Reddit poster also made a good point about the low rate of pay.

“‘So is me designing for your company worth only $6 more than washing shit off of chicken eggs?'” he asked them.

“I was told to leave and that I wasn’t welcome on company property anymore.”

The skyrocketing cost of living plaguing younger generations is also a factor not considered by chicken s–t egg washer guy, but it is on the mind of this engineer, who spent the rest of the post complaining that it seems impossible to find a way to live decently anymore.

“I’m so f—ing tired. Wife makes roughly $27,000 a year as a teacher, and the best I can find as an engineer is $8 an hour? We can’t afford shit. We both agreed to never have kids because of how expensive things are, nothing pays anything.”

The Redditor further says that even his mother-in-law doesn’t believe that her daughter makes just $27,000 a year (which is not an uncommonly low pay rate for new teachers in the U.S.) to the point that she won’t cut them a better deal on the $250,000 mobile home they were looking at.

“But realtor told MIL her mobile home (trailer home) is worth $250,000 and they want us to pay $45,000 as a down payment. MIL won’t budge because she doesn’t believe her daughter makes so little, even after we showed her the paystub. Cheapest apartment near us is roughly $1,400 a month in rent, and it looks like a crack house tbh.”

Many commenters were sympathetic with the poster’s plight and expressed their admiration at their willingness to call out the interviewers there at the table. Fellow engineers also chimed in to let them know that they should be seeking a far higher salary than $40,000.