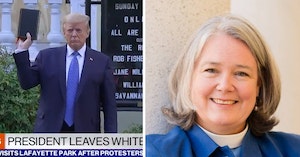 Reverend Gini Gerbasi is furious at Donald Trump after she and a group of peaceful protesters were hit with tear gas from U.S. Park Police and National Guard troops without warning because the president wanted a Bible photo op.

“They turned holy ground into a battleground,” she said according to the Religion News Service.

“I was suddenly coughing from the tear gas. We heard those explosions and people would drop to the ground because you weren’t sure what it was.”

So, Rev. Gini Gerbasi…a Rector at St. Johns shared her story on Facebook about how the police forced their way onto Church property and shoved off the patio of the church, so @realDonaldTrump could have his photo op. Oh, and her husband is a Federal Prosecutor… pic.twitter.com/M8FGeXfLKA

According to Gerbasi, she had traveled from another nearby Episcopal church where she works to join local clergy and laypeople in a peaceful gathering to support the anti-police brutality protests and to pass out water, snacks, and hand sanitizer. They were packing up plenty ahead of the 7 pm curfew time when they were suddenly, without warning, attacked with tear gas. 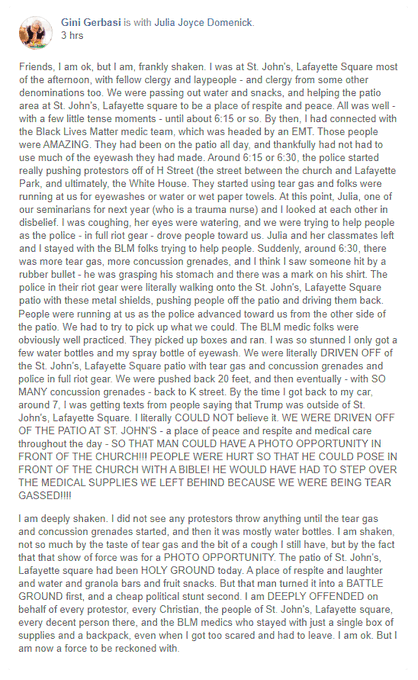 “I was coughing, her eyes were watering,” wrote Gerbasi, referring to a seminary, “and we were trying to help people as police — in full riot gear — drove people toward us … Suddenly, around 6:30, there was more tear gas, more concussion grenades, and I think I saw someone hit by a rubber bullet — he was grasping his stomach and there was a mark on his shirt.”

Trump needs to see this.
This is Rev. Gini Gerbasi assistant rector at St John's church: "I am so [expletive] offended that he would have the nerve to do that, no one knew about this stunt." pic.twitter.com/2AKNvTbzrZ

The Episcopal protesters had to grab what supplies they could and run as police descended on the church with metal shields. They were pushed back over 20 feet, and soon Gerbasi was getting word that Trump was in front of St. John’s Episcopal Church getting his photo taken. That’s when she got mad.

Strong back, soft front. That how I look, AND it's my new easy-to-remember test for living. Strong back: committed to loving & serving others, especially those who are vulnerable. Soft front: willing to be hurt while doing that.

Trump admitted during the photoshoot that it was not his Bible, but “a” Bible, probably because he doesn’t own one.

“I am ok,” Gerbasi concluded in her Facebook post. “But I am now a force to be reckoned with.”

She and everyone else who have read her story.

I am sad, but not surprised, by POTUS photo op. Free religious people should be VERY worried about the fact that an Episcopal priest, Rev. Gini Gerbasi, was forced off of St. John's Episcopal Church grounds. In the midst of everything else, this is a sign of even deeper trouble.

Let that sink in…

Nothing says "I am a religious man" like tear gassing a priest handing out water to peaceful protestors.”

I stand with @GiniGerbasi and her community in this moment. We may not share a spiritual denomination, but we do share in the duty to guide the spirit. @realDonaldTrump’s actions were deplorable and desecrate the name of Jesus Christ.

Wonder how Trump’s #Evangelical base feels about priests being teargassed for a Trump photo op with a bible he’s never read.

“They turned holy ground into a battleground.” – Rev. Gini Gerbasi.https://t.co/2PSZ3bknbD

Trump’s show of Faith is a Farce for it was only a show of FORCE. A final fatal force for Trump. He’s done.

From Trump’s pastor of 5 years: https://t.co/Ufgr1Pa3UT

“When you’re a star, they just let you do it”

Anyone still think that Trump is a Christian?