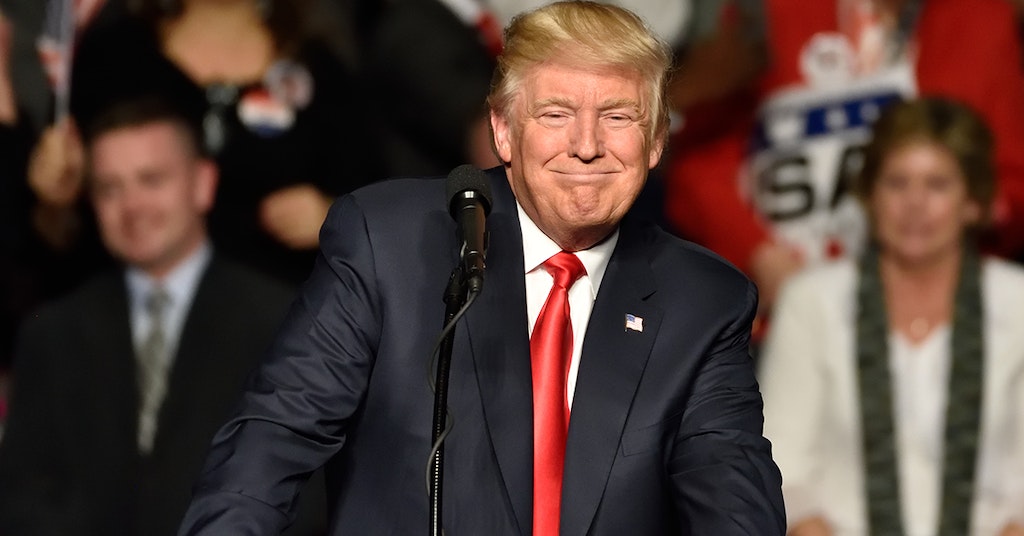 Evangelical Christians have been rather disturbed by Donald Trump’s rhetoric lately. It’s not the racism or the white supremacist dog whistles or the general encouragement of violence against his enemies, however. They’re concerned about how he’s been taking the lord’s name in vain, according to a report by Politico.

Wait till they hear about paying off the women for sex. https://t.co/Ay1X4Dc6WN

It’s not organizing on the left or reaching across the aisle or even fighting hostile foreign nations trying to interfere in our elections that will save us from another four years of Trump. It’s him not being able to stop dropping the GD bombs.

“To most of America, the comments went unnoticed,” writes Gabby Orr. “Instead, the nation was gripped by the moment a ‘send her back’ chant broke out as Trump went after Somali-born Democratic Rep. Ilhan Omar, an American citizen. But some Trump supporters were more fixated on his casual use of the word ‘goddamn’ — an off-limits term for many Christians — not to mention the numerous other profanities laced throughout the rest of his speech.”

It’s gotten so “bad” that West Virginia State Senator Paul Hardesty sent a formal letter to Trump urging him to “reflect on your comments and never utter those words again.” Not the words “send her back” or perhaps the n-word which he was caught on tape using, but things like “goddamn” and “bullsh*t.”

One particular Evangelical pastor (who chose to remain anonymous) had a problem with a speech at the Conservative Political Action Conference in which Trump, in his own words, went “totally off script.”

“‘You know, I’m totally off script right now,’ Trump said at the time. The rest of his speech was littered with cursing, as he promised to ‘keep radical Islamic terrorists the hell out of our country’ and throw undocumented immigrants ‘the hell out.'”

“I’m not going to get into private conversations, but I made sure he knew that type of rhetoric is unacceptable,” said the anonymous pastor. “This was not just an event for adults.”

Won’t somebody please think of the children? No, not the children of immigrants coming home from school to find their parents had been arrested or the ones stuffed into overcrowded prisons. The white ones that might have to hear the President say a swear.

“I think this president needs to be president to all of the people and realize that kids look up to him and adults look up to him,” Hardesty said. “Carrying that type of language from behind the presidential seal is offensive.”

Which type of language, again?

Balking at unseemly language after excusing appalling behavior seems like…straining at a gnat after swallowing a camel? https://t.co/8UdLq5Or8t

Some Evangelical leaders are willing to give Trump a pass on some of his naughty language because they understand that in moments of anger, things happen. But others are questioning whether it’s really a matter of anger or if he really respects his base.

“Carelessly invoking the Lord’s name in a fit of anger is one thing,” said another anonymous pro-Trump pastor. “But repeatedly doing it for shock value … that does raise questions about the president’s respect for people of faith.”

Donald Trump has slipped up a couple times when referencing the details of the Christian faith, putting the very idea that Trump is really a Christian at all in doubt. Maybe he’s faking it for votes? Just a thought.