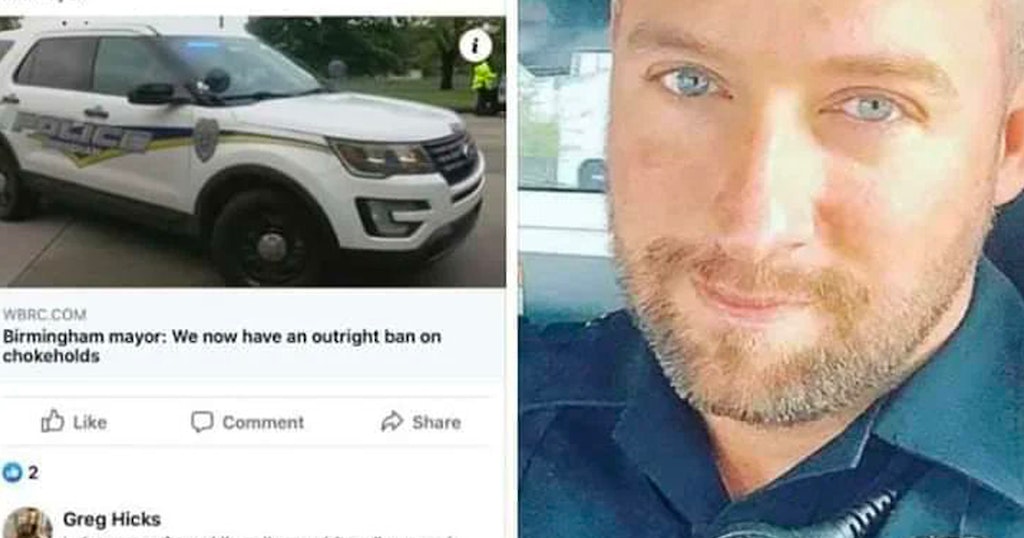 A former officer named Greg Hicks is still causing trouble for the Birmingham Police Department after a comment he made on Facebook went viral. A screenshot of a post made by another man about the city’s mayor announcing a ban on chokeholds in the police department shows Hicks commenting underneath it.

“I always preferred literally crushing ribs to gain compliance anyway, rather than a safe chokehold that’ll gain compliance with little or no physical damage done,” Hicks writes. “If I’m gonna have to do paperwork on you, you’re gonna earn it.”

This is the profile of a thug and bully. Fire him now before he kills someone innocent.#BadCop #DefundThePolice #AbolishPoliceUnions pic.twitter.com/8iokstUodK

Hicks is saying that chokeholds are actually the less violent option to subdue a citizen, so he would deliberately choose more violent tactics. He wanted an arrest to end with the arrestee in pain or injured to make filling out paperwork on the arrest “worth it.” Because he is a sicko.

Pictures of Hicks in uniform were found by social media users, according to the Daily Dot, and they called for him to be fired. On Wednesday, a BPD spokeswoman Ariana Garza explained that Hicks hasn’t worked for the department since 2018.

“When the individual’s distasteful social media comment was brought to our attention, BPD immediately initiated an investigation,” Garza said.

The person depicted in a trending social media post is NOT a Birmingham police officer. The individual separated from BPD in 2018. When the individual’s distasteful social media comment was brought to our attention, BPD immediately initiated an investigation. pic.twitter.com/xPDcFL5KGT

It might be a relief to learn that Hicks is no longer employed in Birmingham, but that does not necessarily mean he is no longer employed as an officer. Many cops are able to leave one department and pick up in another, even if they were fired or have a terrible record. Others wondered about the fate of people arrested by Hicks. If he is telling the truth about his own conduct, many of them deserve justice and some restitution:

The above tweet refers to the below documented issue where the "former officer" said he prefers "crushing ribs" during arrests than doing "chokeholds," has Greg Hicks carried his brutality to another PD or Security Co.? pic.twitter.com/1WYtlCTXPs

I think y’all need to examine every arrest of his regardless if he’s still employed or not.

He was a cop for the BPD when I wrecked in Lexington KY & he accessed my police report/personal info without my permission or request, all because he heard about it on FB. Then proceeded to message me about it on FB. He’s known for this behavior. Investigate the arrests he made.

What about all his arrests? Those people must have been treated wrongly with how his values are shown. Couldnt imagine the amount of people he has hurt under your name

Hicks is an example of why police unions are so corrupt: they allow behavior likes this to hide and thrive, with no accountability. The fact that he was willing to tell on himself shows how safe Hicks felt, with no expectation of ever seeing any consequences.