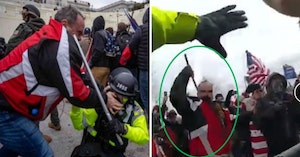 The notorious “eye gouger” from the attempted coup at the Capitol on January 6 is reportedly uncomfortable in the jail he was put in after being arrested on multiple felony charges, including assault of a police officer, after he was filmed appearing to try to gouge out a Capitol cop’s eye. The rioter, Thomas Webster, is a former NYPD officer himself, and doesn’t like being on the other side of the bars with those who committed what his lawyer called “inner-city crimes.”

We all know what “inner-city” is code for, right?

Webster’s attorney says that the conditions in the jail he’s in currently have been “a shock” for “a middle age guy whose never been arrested before.” You might think that a former New York police officer might be somewhat familiar with “inner-city” jail conditions, but perhaps he simply wasn’t concerned about that until now.

He is reportedly requesting that he be moved to a jail in upstate New York, where they presumably have something better than a “dormitory setting.” According to Washington Post reporter Rachel Weiner, he has been moved to different jails across the country “on the way to D.C.” where he will stand trial for his crimes.

Prosecutors argued against Webster’s release when he was initially arrested back in February, noting that footage from the insurrection showed his attacks against Capitol police to be particularly violent and vicious, saying he “goes after that cop like a junkyard dog—teeth clenched and fists clenched.”

“His teeth are gritted. This is a man who is about to unleash some kind of violence on somebody and, in fact, he did on that poor police officer,” said assistant U.S. Attorney Benjamin Gianforti.

In addition to the eye-gouging, prosecutors obtained footage of Webster appearing to beat a Capitol officer with a flagpole in one of the more ironic images from that day.

Earlier reports said that Webster planned to plead not guilty, but Gianforti noted that sentencing guidelines would recommend five years in prison even if Webster pleaded guilty. The former NYPD officer would likely find that to be much less comfortable than a few months in “inner-city” jails.