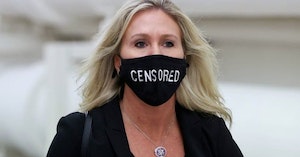 More evidence has emerged of Rep. Marjorie Taylor Greene’s unfitness for office in a Mother Jones report on a Facebook group for the right-wing “Family America Project,” for which Greene is listed as a moderator. Images obtained from within the group show fairly explicit death threats against Democrats and any one else they count as their “enemies.”

Investigators also found various racist memes and attacks on the Obama family and support for the John Birch Society, “a far-right conspiracist outfit that claimed throughout the Cold War that globalist and communist treason had penetrated the highest levels of US government.” The “society” also vehemently opposed the Civil Rights Movement in the 1960s.

Greene has already suffered consequences for her support of QAnon, her role in inciting the assault on the Capitol, and various pre-2020 social media posts that seem to encourage violence against Democrats. The House of Representative voted on Thursday to remove her from multiple committee assignments, reducing her power over policy, with only 11 Republicans voting in favor of the removal.

The QAnon congresswoman’s official biography also brags that she was once the nation director of this Family America Project, founded by Genevieve Peters, better known as a lady who got kicked out of Trader Joe’s for being an anti-masker.

Posts in the Facebook group include an image of a noose on a black background declaring: “If we want to make America great again we will have to make evil people fear punishment again.” Another sported a patch with the Punisher skull saying that “God will judge our enemies, we’ll arrange the meeting.”

Other posts made it clear who these “enemies” are, exactly.

“I will defend my country against all enemies foreign and domestic, including liberal Democrats,” one poster stated.

“I reckon I’ve had enough of this Democrat shit. How about you?” said another with an image of the killer from the movie Sling Blade.

Other gems include posts referring to Michelle Obama as “the White House dog,” many references to frequent neo-Nazi target and Jewish billionaire George Soros, and blatant Islamophobia.

“We don’t want Muslims in our government,” wrote one group member. “Our parents and grandparents didn’t fight for this. We might have to!”

Some Democrats are still pushing to have Greene removed from office as her horrific background unfolds, but it appears unlikely to happen as Republicans have strongly indicated that they will stand with her.