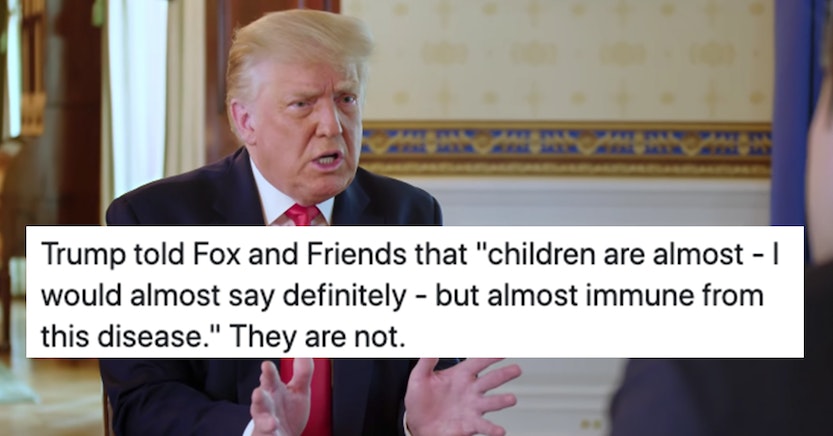 Watching social media platforms finally start to take even the smallest stance in pushing back against President Trump’s persistent need to spread lies to the American public has been invigorating. They should have done this years ago, and they should have done it far more aggressively. Perhaps if they had, fewer people would have bought into all the false claims that coronavirus is a hoax or that masks are for weaklings, and more Americans would still be alive.

But, again, at least they’re starting to do something now.

On Wednesday, Facebook and Twitter both removed posts from the Trump administration which included video of a Fox News interview with President Trump in which he made false claims about coronavirus.

The interview saw Trump insisting that it’s safe to send children back to school in the midst of a pandemic because they are “almost immune” to COVID-19. His statement is not only completely untrue — children can and do catch, spread, and die from the virus — but it also comes on the heels of a report that at least 260 teens and children tested positive for COVID-19 after mere days at a summer camp in Georgia.

“The video includes false claims that a group of people is immune from COVID-19 which is a violation of our policies around harmful COVID misinformation,” said Facebook spokesman Andy Stone as to why the video containing the interview was removed from the president’s page.

Twitter offered a similar sentiment, citing COVID-19 misinformation after the video was shared by @TeamTrump and retweeted by Trump himself.

“The President was stating a fact that children are less susceptible to the coronavirus,” Courtney Parella, Trump’s deputy national press secretary, told NBC News. “Another day, another display of Silicon Valley’s flagrant bias against the President, where the rules are only enforced in one direction.”

Facebook has, of course, been painfully reluctant to stop the Trump campaign from lying in both posts and ads, only removing content when they were literally accused of promoting Nazi imagery.

But feigned martyrdom is Trump’s favorite move, and one that seems to work with his base, so the narrative of the evil social media empires refusing to let the poor president peddle his lies on their platforms continues to circulate.