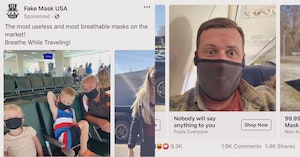 Ads For Fake Masks Are Spreading, And People Are Angry

We’re all acutely aware that anti-maskers are still refusing to take the pandemic seriously, but the way social media companies have allowed their misinformation and “helpful hints” at getting away with shirking safety protocols to circulate over the past year and a half has been particularly frustrating.

And despite Facebook’s promise to crack down on misinformation and false news, their interest in stopping such threats apparently doesn’t extend to advertisements.

Visual effects artist Todd Vaziri captured screenshots of a sponsored post he received on his Facebook page, promoting Fake Mask USA, a company that sells masks that pointedly do nothing to stop the spread of COVID but technically comply with mask mandates.

“The most useless and most breathable masks on the market!” the ad reads, while the company’s website promotes the false claim that other cloth masks also do nothing to stop the coronavirus from spreading.

“4,300,000 people have died of Coronavirus, and Facebook is serving up ads like this,” Vaziri wrote upon sharing the images.

His sentiment was shared by others frustrated at the way social media has caused misinformation and conspiracy theories based in an opposition to science (or a loyalty to Donald Trump) to spread like wildfire.

This is far from the first time the platform has been criticized for these specific ads.

A number of users said they had reported them in the past, only to see the ads keep popping up, while screenshots of similar ads from the same company have circulated on Twitter on multiple occasions.

The company has also started marketing fake masks for children, despite reports that COVID infection rates among children have risen in recent weeks. The vaccine is still unauthorized for children under the age of 12.

Facebook temporarily prohibited ads for any non-medical masks last March but began allowing them again in June when official guidelines on masking shifted.