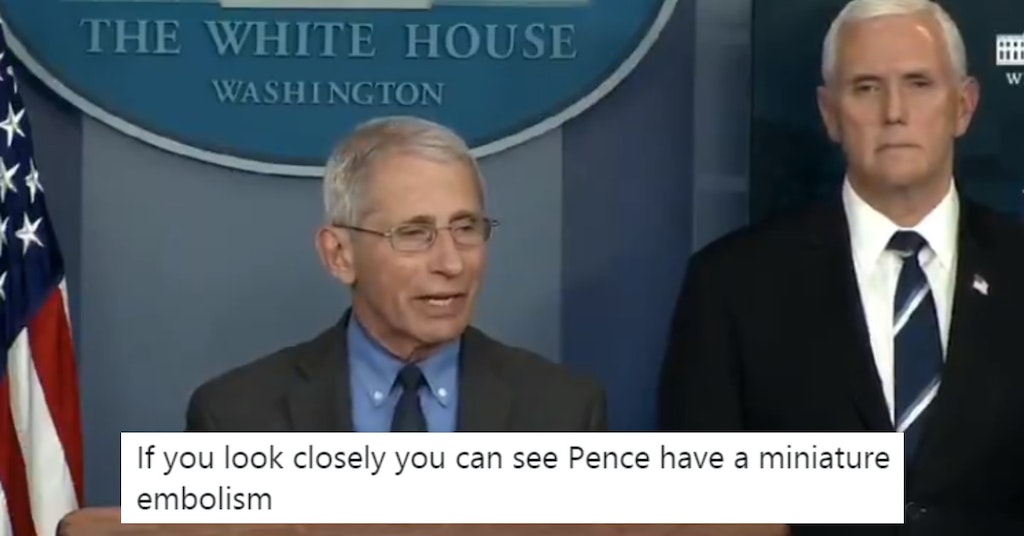 Director of the National Institute of Allergy and Infectious Diseases Dr. Anthony Fauci has become a refreshing voice of reason during the global coronavirus pandemic. It’s always nice to hear from him at press conferences instead of hearing whatever nonsense has burrowed its way into Donald Trump’s head to be regurgitated in barely-comprehensible babble. What’s even nicer is that Dr. Fauci is not a total bigot, as he made clear while standing in front of Vice President Mike Pence on Tuesday.

Dr. Anthony Fauci: "When all this is over, and as we've said, it will end. We will get over Coronavirus, but there will still be health disparities, which we really do need to address in the African American community."

While addressing the very real and serious health disparities between black and white Americans that are leading to a disproportionate number of coronavirus deaths in black communities, he also took a moment to praise the LGBTQ community’s survival of the AIDS crisis of the 1980s.

Dr. Fauci at #COVID19 press conference: "There was extraordinary stigma against the gay community during the #HIV/#AIDS crisis. That changed when the world saw how the gay community responded with incredible courage, dignity, strength and activism." https://t.co/3C154tFY3h #LGBTQ pic.twitter.com/PBYc11Fj6J

It was an interesting segue, and true, but many on social media couldn’t help but notice that the person attending this particular hearing just so happened to be VP Mike Pence, a man notorious for his homophobia and his failure to act on an HIV outbreak when he was governor of Indiana. His initial refusal to allow for a clean needle exchange program and general hesitancy to act is widely considered to be a large part of the reason the outbreak got as bad as it did.

Was Fauci’s praise of the LGBTQ community in the face of such a horrific epidemic meant to make Mike Pence squirm? We may never know, but it’s highly satisfying to watch anyway. Gay Twitter loves it.

Can you imagine the courage of conviction it takes to describe the bravery of the gay community during the AIDS crisis as part of a speech about the disproportiate impact of COVID on black Americans…with Mike Pence standing over your shoulder? ????????Dr. ???????? Fauci ???????? https://t.co/MxxC1ixb82

Dr. Fauci praising the gay community while standing next to Mike Pence is the type of big dick energy I’m here for.

Dr Fauci praises the gay community’s strength in response to the AIDS crisis and hammers home the current glaring healthcare disparity in white and African-American communities. ????????????????????????

Oh and with mike pence standing next to him ???? https://t.co/4oqnSYXBeg

You love to see it.