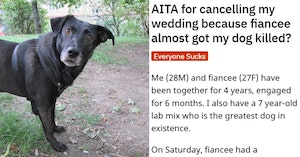 An entry in Reddit’s “Am I The A–hole” forum is standing out as a rare case of everyone involved being less than an ideal human being after a man called off his wedding to his partner of over four years because she almost got his dog killed.

The near-fatal incident was an accident, or at most a case of negligence, but the dog did survive and the OP’s fiance was clearly highly distraught that it was harmed because of her actions. However, citing a pattern of reckless behavior, the Reddit user decided to immediately cancel the wedding and break up with her when he found out what happened.

According to the OP, he left his dog at home while his fiance was having her bachelorette party, but told her to lock him in the bedroom when the party started. Either because she forgot or thought it wouldn’t be a big deal, she failed to follow these instructions, and the result was close to disaster.

“5am on Sunday I get a frantic call that something’s wrong with the dog,” the OP wrote. “She was drunk, so I told her to get a taxi and go to the emergency vet clinic. When I got there, she looked like she hadn’t stopped crying for hours and she couldn’t even speak. Two of her friends were there so they told me my dog is alive but not well. I felt sorry for her for an entire 10 minutes while waiting for the doctor.”

The fact that his fiance was crying so much for so long that she couldn’t even speak at least shows a high level of remorse, even if what happened with the dog was pretty bad.

“But then, the doctor told me my dog ingested large amounts of alcohol and chocolate edibles. The girls apparently thought it would be cool to leave everything out on short coffee tables, leave the dog to wander around instead of putting him in our bedroom, and then get wasted and not notice he was going to town with the booze and edibles.”

As many people know, chocolate is poisonous to dogs if ingested in a high enough quantity, and alcohol is not great for them, either. It’s definitely irresponsible to leave these items, especially chocolates, around unsupervised dogs, but many people were surprised by the severity of the OP’s response.

“When we got home, I told my fiancee to pack and get out of my house and my life. I told her to tell her guests the wedding is off, and I’ll tell mine. She was shocked, but she took her things and left.”

As is often the case in AITA situations, the OP got a lot of messages from family and friends telling him their opinions on the matter, which seemed to universally be that he overreacted to a mistake that didn’t actually kill the dog. However, the Reddit user further explained that she does things like texting while driving and leaving burnable items on the stove, and in a later edit said he realized that he doesn’t want to spend his life with someone like that, thinking of his future children.

This information earned the post an unusual “Everyone Sucks” rating, with commenters generally split on who was in the wrong. Some felt that the fiance’s negligence with the dog proved that she didn’t care about her partner or the life of the animal, while others felt it was wrong for the OP to leave the dog in her care when he was aware of her history of reckless behavior. Many other comments expressed that this seems like a “last straw” situation and that the relationship was doomed anyway.