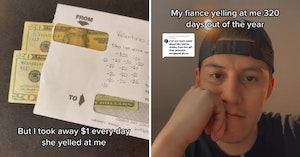 A TikTok video went viral after a young man showed how he put aside $360 for a Valentine’s Day gift for his fiance and took out a single dollar each time she yelled at him. After a year, TikTok user Isaac Ramirez says he had just $40 left, enough for candy and flowers, prompting concerned commenters to suggest that he might be in an abusive relationship if his partner is yelling at him 320 days out of the year.

The original video, which has gained over 9.6 million views, shows an envelope full of fresh cash, first fresh and then later covered in tally marks to track all the times Ramirez’s fiance shouted at him. It then shows another envelope similarly filled with money labeled “treat yourself king.”

While some comments on the video suggest that there are people out there upset with Ramirez over this, they must have been buried by all the people who either think this is a great idea and want to do this themselves or by folks who are concerned about the TikTok user’s safety.

“[Y]’all are more upset about him taking money from her gift than potential emotional abuse,” the top comment reads.

“It’s time to find a new girl if she yelling at you 320 days of the year dawg,” said another.

Others have suggested that Ramirez adds money back in every time his fiance does something nice for him, but nice gestures can’t erase sustained verbal abuse. Replies by Ramirez to commenters seem to suggest that he stays with this woman because leaving would be difficult, which is very often the case in abusive relationships. Other times he’s claimed that the relationship is mutually toxic, though the solution for that is the same.

Ramirez posted a follow-up video using audio from another TikTok entry, looking sad and seeming to wipe away a tear to the sound of a woman very angrily breaking up with someone.

Ramirez’s comment replies on this video are even more concerning, saying things like “I’d be found dead in a ditch” and “she’ll cut my legs off” to comments suggesting that he leave his fiance as soon as possible if that’s the kind of yelling he endures on a regular basis. Although the audio was not really his fiance’s voice, he responded to the top comment pointing this out by suggesting that it’s not far off from what he often hears: “It’s an example.”

Others have come to Ramirez’s defense rather than just telling him to leave the relationship, understanding that doing so can be incredibly hard and even dangerous in abusive situations. The chances that an abuser will kill their intimate partner spikes when the victim leaves, even when said victim has outside help to escape.

“[P]eople don’t realize how hard it is to leave an abusive relationship,” wrote one understanding commenter. “Find someone who can help u cause trust me the pain isn’t worth it.”

It’s also important to remember that there are many men out there who are victims of abuse, and they are less likely to seek help because of a society that still largely believes only women can be victims and that verbal and emotional abuse somehow don’t count or aren’t dangerous.

“[W]hy is everyone saying ‘but you married her?’ as if manipulation isn’t a thing men experience,” asked another TikTok user.