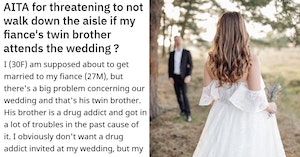 A woman who is potentially no longer about to be married took to Reddit’s infamous “Am I The A–hole” forum for advice after she got into a fight with her fiance over whether his twin brother is allowed to attend their wedding. The Reddit user said that she didn’t want his brother there due to past issues with drug use that resulted in a period of incarceration even though he successful went through a recovery plan and has been off drugs for some time.

Redditors have solidly voted this woman to be in the wrong in this situation and are predicting that the wedding won’t take place after she treated her fiance, his brother, and his mother so badly when they tried to convince her to change her mind.

The entire post uses heavily biased language against people who are or have been addicted to illicit substances, blaming them all for an issue often caused by trauma, mental illness, hardship, and/or genetic predispositions to addiction.

“I obviously don’t want a drug addict invited at my wedding, but my fiance insists not only to invite him, but to make him his groomsman too,” she wrote. “He says that he went to rehab and he’s now ‘clean’, but I seriously doubt that, I know people like him, they never change.”

To be clear, many people are successful in stopping or severely reducing drug use when treated with compassion and given necessary medical assistance for their addiction, which is defined as a chronic medical disease by the American Society of Addiction Medicine.

The OP then reveals that her fiance’s brother is not the only member of his family she seems to despise. She refers to his mother as a “nutcase” and was furious when her fiance invited them both over to try and get her to see reason.

“I was furious that he would invite that drug addict and their nutcase of a mom to my house without consulting me first. I told them that I’m not gonna make dinner for a dopehead and to please leave my house.”

She further reveals severe prejudice against people who have been caught up in the U.S. justice system, implying that anyone who has even been to jail is a bad person.

“His brother then started sobbing, saying that I’m unfair for not letting him support his brother on his big day just because of some stupid mistakes and my future MIL started berating me about how heartless I am for doing this to their sons and being so hung up on something that’s in the past, but I told them to drop the act, these ‘stupid mistakes’ literally landed him in jail and I’m not gonna allow a former offender at my wedding under any circumstances,” she said.

Predictably, this blew up into a massive argument between the OP and her fiance, who she said slept on the couch that night and was still treating her “coldly” by the time she logged on to Reddit. However, she insists that she will not change her mind, which makes it a little strange that she even bothered to ask strangers if she was in the wrong.

If she was simply hoping for validation, she definitely ended up disappointed. Reddit users pointed out that being addicted to drugs doesn’t make a person bad, nor does being formerly or currently incarcerated, and any of the other guests or catering staff could have experienced either of these things without her ever knowing. This includes people who are in recovery for addiction.

Mostly, they hope her fiance breaks up with her.