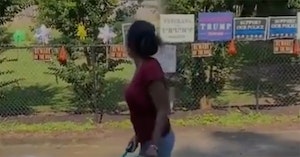 Trump supporters are still alive and well in the United States, and according to a video shared to TikTok and then boosted by a progressive Twitter account, at least one of them is still displaying Trump signs and turning a hose on her Black neighbor.

The video, shown on the Marjorie Gaylor Queen (@Tim_Tweeted) account, shows a woman with Trump signs — that the original poster has dubbed a “Karen,” spraying her Black neighbor with a hose and yelling at her.

The video shared on Twitter appeared to splice together a two-part TikTok from the @denisia_isme account. A note with the first part video, reposted Wednesday morning, maintains, “They deleted the video so ima keep posting it.” The second part video has the same notation.

The person who posted the video maintained that the hosing is a regular occurrence, and seems bewildered that the Karen would go to such lengths. Also bewildering: That people are still showing support for a candidate who lost his re-election bid six months prior.

A number of people took to Twitter to respond.

“How is that legal?” one Irish person asked. “The bar for harassment must be a mile high in the States. That would get you jail in Ireland.”

She also asked and observed, “Why do people put so much effort and energy into being racist? The daily effort to be so hateful and evil. So vile. I will never understand that.”

Another person piled on, noting, “These people have a lot of anger inside of them. What a sad life.”

And perhaps that’s at the root of this. As a person adding to that last observation said, “That’s what they’re angry about. Their sad lives, that they built for themselves. They think they’re “owed” something without actually having to do the work for it.”