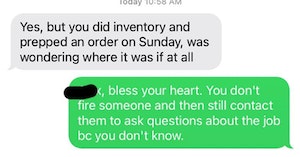 The audacity of a bad boss generally knows no bounds, but what happens when they’re not even your boss anymore? For one confused redditor, the answer turned out to be that the audacity grew even more out of control.

u/ScooterBobb shared a text message exchange he had with his former employer after his position was eliminated, yet the boss actually appeared to expect him to keep doing work while unemployed.

“Good morning, did you create an order for this week, or an inventory?” the first message, received bright and early in the morning read.

The ex-employee expressed his confusion, and pointed out that he didn’t work there anymore, to which the boss replied, “Yes, but you did inventory and prepped an order on Sunday, was wondering where it was if at all.”

The exchange continued, with the person in charge clearly failing to understand what the problem was with asking someone she fired to keep on helping her out in literally any way.

The fired worker wasn’t the only one stunned by this ridiculous request, as other Redditors chimed in about how bold these expectations were.

Once again, the r/antiwork subreddit proves to be a great wealth of information regarding exactly what type of boss to never, ever be.