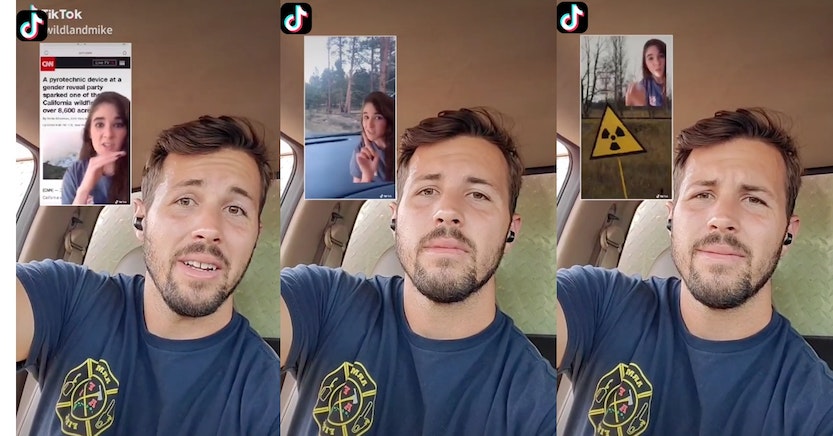 A firefighter is being praised for his TikTok taking down a conspiracy theorist who believes the fires devastating the West Coast are being set on purpose.

Michael, who goes by @wildlandmike, is clearly frustrated at the start of his video. It’s hard to imagine how annoying it is to risk your life fighting fires every day only to have a bunch of climate change deniers sitting at their keyboards telling people that this is all some big conspiracy or hoax.

The young woman in the video he’s responding to says she’s going to share something “so crazy it might be true.”

“Is it not weird to you guys to know that the fires know when to stop at the border?” the woman asks, repeating a popular and really, really stupid talking point among wildfire conspiracy theorists.

The woman then tries to pretend it’s suspicious that we’ve only heard how one fire started, the one caused by a gender reveal party.

Then the conspiracy theorist gets even more ridiculous. She shows photos of partially burned trees, supposedly from outside the Grand Canyon, and then speculates that something sinister was going on because there’s a “biohazard” sign near them.

Except, according to Mike, who worked there, that sign doesn’t exist.

The original conspiracy theory video has been taken down, though it’s unclear whether that was a choice by TikTok or perhaps the original uploader, realizing how idiotic she made herself look in under a minute.

But her braindead ramblings will live on in Mike’s simple debunking, which has gone viral both on TikTok and on Twitter.

It’s difficult to say which responses were more prominent, the ones obsessed with Mike’s video or the ones rolling their eyes at the original.

It’s great that people like Mike are bothering to take the time to correct conspiracy theorists, but it’s absurd that they have to. Maybe social media was a bad idea after all.