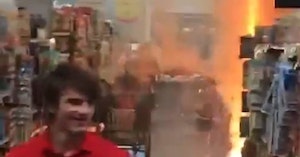 A grocery story in Eagan, Minnesota, was the scene of some teen vandalism that quickly got out of hand. A video of the event was filmed in the Hy-Vee, and shows what happens when you set off fireworks inside. The place goes up in a blaze. Fox 9 reports that both police and firefighters came to the scene and the fire was put out. However, smoke caused the store to close for the afternoon.

And that was great for the employee caught on camera in the viral clip. He basically looks at the fire, snaps a pic, and walks away. It’s too real:

Like, of course someone being paid minimum wage isn’t going to throw their body onto a pyre to save the produce section. That is not a fire that will be put out with a little fire extinguisher either. While there were some who criticized the grocery store clerk’s casual response, most of the folks watching found his cavalier walk away hilarious (and completely understandable):

Apparently, no one was injured though three boys, ages 14,15, and 16 were arrested then released and may be facing charges from the Dakota County Attorney’s Office. No word yet on if this heroic employee ever came back to work or if he had a job when he arrived. But from the expression on his face, it seems like it was worth it.